Are the other Puella Magi mangas separate stories?

I discovered some other titles in the Puella Magi series today, Kazumi Magica and Oriko Magica: 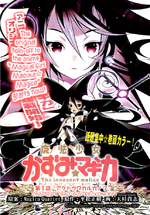 Are these completely separate stories, or is there some overlap with Puella Magi Madoka Magica?

Madoka Magica (art by hanokage; story by Magica Quartet1) is an almost shot-for-shot manga adaptation of the anime. There are a couple minor differences (e.g. it's made more explicit that Sayaka kills the two guys on the train just before she turns into a witch; Kyuubey does these freaky open-mouthed smiles), but other than those, it's pretty much the same as the anime.

Kazumi Magica: The Innocent Malice (art by TENSUGI Takashi; story by HIRAMATSU Masaki) is set in the same universe as the anime and shares mechanics with it (such as Grief Seeds, Soul Gems, and so forth), but has very little in common with the anime in terms of plot. The city of Mitakihara is mentioned and Kyuubey shows up from time to time, but there's nothing to suggest that the characters of Kazumi Magica ever interact with the characters of Madoka Magica. (Kyuubey excluded, because he seems to be sort of a hive-mind thing without real individual identity.)

Kazumi Magica is compatible with the plot as depicted in the anime, given that there are basically no points of overlap between the casts. Kazumi Magica is generally considered to be low on the canonicity scale.

Kazumi Magica was originally serialized in Kirara Magica, and was later collected into five volumes (covers: 1, 2, 3, 4, 5).

Oriko Magica (art by MURA Kuroe; story by Magica Quartet1) depicts a possible timeline that occurs prior to the main anime timeline. All the major characters of the anime appear, with a particular focus on Kyouko and Mami, as well as some original characters such as Yuma and Oriko. Judging from the way Homura is depicted in Oriko Magica, it is suspected that it takes place in one of the timelines between timelines 3 and 4 of episode 10 of the anime.

In addition to the two original volumes of the story (covers: 1, 2), there was "Another Story" (別編, cover), consisting of the stories Noisy Citrine and Symmetry Diamond, originally serialized in Kirara Magica. A longer continuation, titled "New Contract: Oriko Magica ~sadness prayer~" ([新約] 魔法少女おりこ☆マギカ ～sadness prayer～, covers not yet available), begins serialization in November 2013.

The Different Story (art by hanokage; story by Magica Quartet1) depicts a possible timeline that occurs prior to the main anime timeline (presumably between timelines 4 and 5 of episode 10). All of the major characters of the anime appear, again with a heavy focus on Kyouko and Mami. There are no (significant) original characters in The Different Story.

Noteworthily, The Different Story begins chronologically prior to Episode 1 of the anime. In fact, Volume 1 of The Different Story begins shortly after Mami contracts with Kyuubey, and then follows her life through her meeting and subsequent partnership with Kyouko. Volumes 2 and 3 bring us forward to the timeframe in which all the timelines depicted in the anime occur.

The Different Story is generally considered to be very high on the canonicity scale, because

In light of these facts, it is generally agreed that The Different Story can reasonably be viewed as essentially canonical in the context of the anime, and so may fairly be interpreted as a direct extension to the anime. This is important because, if The Different Story is canonical, it gives us lots of knowledge about Mami and Kyouko prior to the events of the anime. All of this knowledge is necessarily valid in all timelines, because it occurs prior to Homura waking up in the hospital. As such, it would do much to inform Mami and Kyouko's motivations throughout the anime.

The Different Story was published as three volumes (covers: 1, 2, 3).

Madoka Magica –Rebellion– (劇場版 魔法少女まどか☆マギカ [新編]叛逆の物語; art by hanokage; story by Magica Quartet1) is a closely-hewing adaptation of the third movie, just like Madoka Magica was a closely-hewing adaptation of the series (corresponding to the first two movies, I suppose). All signs point to the story being plotwise identical to the third movie, but with some stylistic differences, both minor and substantial. With the third volume yet to come, though, anything could happen.

Madoka Magica –Rebellion– will be published as three volumes (covers: 1; 2, 3 not yet available).

Suzune Magica (art and story by GAN, I think) is another spinoff that has just begun. At a glance, it looks like it has nothing to do with the main storyline (though Kyuubey shows up, unsurprisingly), but as with all things Madoka, looks can be deceiving. More details as they come.

Tart Magica: The Legend of "Jeanne d'Arc" (art and story by the group Golden Pe Done) is yet another spinoff, and began serialization in volume 10 of Kirara Magica (the Nov 2013 issue). As the title suggests, the main character is Joan of Arc, who is a magical girl. In keeping with the prevalence of suffering in the Madoka Magica world, it appears that the story starts with a shot of her burning at the stake, and then flashes back to how, exactly, she came unto such suffering.

Note: "Tart" is, supposedly, an alternate spelling of Joan of Arc's last name.

1 "Magica Quartet" is the collective name for SHINBO Akiyuki, IWAKAMI Atsuhiro, AOKI Ume, and UROBUCHI Gen, who are the director, producer, character designer, and writer for Madoka Magica, respectively.

Puella Magi Homura Tamura -Parallel Worlds Do Not Remain Parellel Forever- (Comic by Afro) is a 4Koma style comedy parody of the Puella Magi Madoka Magica series. It takes place during many of Homura Akemi's alternate timelines. It is established that there are many Homuras all traveling through time all trying (and failing spectacularly) to find some way to Madoka. The main character is Homura Akemi (but implied to be a Homura from an alternate timeline) with the rest of the Madoka Magica cast making appearances. There also several other Homuras who make appearances from time to time. Typically in the manga, Homura arrives in a new timeline and finds some wildly exaggerated change from the regular story (like a world where Magical Girls are all motorcycle riders, or one where Mami Tomoe has taken over the world), and Homura tries to save Madoka in the middle of all the chaos, while trying to understand how the world has changed each time.

So far, there are only two volumes to the manga. They are published in the U.S. by Yen Press. The first volume came out August 2015, and the second in February 2016. According to Amazon, Vol. 3 is scheduled to come out September 19, 2017.

19
What do the Runes say in Madoka?
12
What do the runes that roll (while Connect plays) near the end of the second Madoka movie say?
18
How did Homura get a bow as a weapon?
7
Who is that at the end of episode 2?
11
Why is "Puella Magi" equivalent to "Mahou Shoujo"?
4
Was the "Cake Song" released in a soundtrack?
5
What language used by Kajiura Yuki in Puella Magi Madoka Magica and Fate/Zero OST lyric?
5
What if someone wishes to not become a magical girl in Madoka Magica?