What is this Zabieru Tanegashima character a reference to?

In chapter 17 of Denki-gai no Hon'ya-san, page 9, a figure of a character called Zabieru Tanegashima appears: 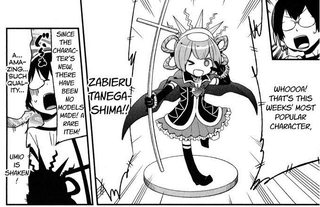 As was suggested by senshin in the comments, this is a moefied version of the missionary Francis Xavier, the first Jesuit missionary to arrive in Japan (in 1549), as well as the island Tanegashima. It is a source of some debate among historians as to whether Xavier ever actually went to Tanegashima (see for instance this article) but in any case Tanegashima is the first known point of contact between the Japanese and the Europeans, by a Portuguese ship blown off-course en route to China in 1543, and is thus associated with the introduction of European culture to Japan and indirectly (but strongly) to Xavier.

Moe versions of historical figures and other classic works are nothing new. The most famous examples are probably people from the Sengoku Period (a time period that Xavier's arrival conveniently falls in), though the Three Kingdoms era is also pretty common. Some examples of this are Sengoku Collection, Sengoku Otome: Momoiro Paradox, Oda Nobuna no Yabou, and Hyakka Ryouran. This moefication of historical figures has also been parodied in some other works, like Sayonara Zetsubou Sensei and Princess Jellyfish. This appears to be another parody in a similar vein.

For obvious reasons, Xavier is associated with Christianity in Japan. This explains the large cross wielded by the character and the head ornament, both of which are significant Christian symbols and which are the most prominent features of the character design.

After reading the chapter myself, I don't think there's anything more to the reference than that.

6
What's the significance of apples in the OP?
1
What is the meaning of the Yellow balls in the second episode of Denki-Gai?