Who is the strongest hero physically after Saitama?

In One Punch Man, taking out Saitama and Tatsumaki (who is very powerful due to her esper powers and not her physical strength), who is the strongest hero physically? Bang and Bomb might be very powerful, but they rely on martial art techniques and hitting vital points, so I'm not sure if all their power could be attributed to their physical strength.

According to Fubuki Fubuki mentions that Blast is "the one at the top of all heroes" during her talk with Saitama in his apartment, putting Blast alongside King in terms of power.[7] She also suggests that he could defeat the whole S-Class alone. Sitch also mentions Blast would only present himself if humanity is in peril.[8]

Blast was able to bring Elder Centipede—a Dragon-level threat strong enough to combat the likes of Bang, Bomb and Genos simultaneously—to the brink of death, although he was smaller and as such presumably weaker when he first fought Blast.[9] Despite this, Psykos believed that Blast could still defeat Elder Centipede even in his current state.

Fubuki speculates in the databook that Blast is stronger than King, with a set of psychic powers, the ability to command trillions of robots, and to shoot lasers from his eyes. She hypothesizes that he could beat the rest of the S-Class all at once.

Blast is none other than Saitama (not exactly sure though); probably Saitama was Blast before but lost his emotions (and hair) after he broke his limiter through his rigourous training 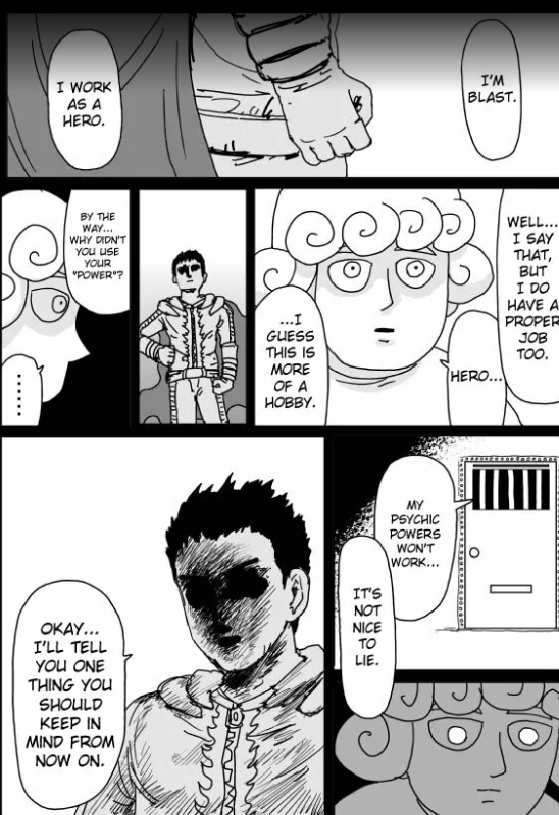 Anyways never mind that Blast should be the strongest hero after Saitama … and that the Fubuki's speculative statements in the databook may be false … because Fubuki admits King is strong (which in reality is completely rubbish).

No one knew much about Blast, and no one, including the Hero Association, can command him.

If you read the manga, you'll see that even the Hero Association couldn't contact Blast during the Elder Centipede strike.

So yeah, Blast should be the right answer, but another candidate would be Garou. He just doesn't seem much of a bad guy (in the later part of the manga).

In the webcomic Saitama defeats Garou and Garou realises his actual goal in his life and becomes a good guy (maybe even predictably a hero later).

We should wait till the end to see how the story goes.

4
Why exactly is Saitama a hero?
4
Why does the Hero Association ratings have several S-Class Heroes to be more powerful than Tatsumaki?
7
If the Hero Association thinks that King is the strongest man alive, why isn't he ranked higher?
1
How did Saitama defeat a monster before becoming a hero?
0
Who is the strongest esper in One Punch Man?
5
What is the source of superpowers in the One-Punch Man universe?
5
How could Armored Gorilla beat Marshall Gorilla?