So Tank Top Master was about to hit Garou, Mumen Rider got in the middle and he received the punch for him, and he wasnt knocked out. I thought Mumen Rider was a weakling who didnt want to be promoted to B Class because he wasnt good enough (besides being his most powerful move throwing his bicycle to someone says a lot about how powerful he is) , but then, how could he resist a punch from Tank Top Master?

For me, the answer is yes.

He represents this hero of society that we often see in the Shonen. The kind of person born without particular talent, but to whom we are all related. It represents the normal human being, without power, but with determination. A kind of Saitama missed.

But he's got a strong resistance linked to his determination. We can see this in Episode 9 of Season 1 : He conceded Deep Sea King's blow and he remained conscious (he was still breathingafter that. Saitama caught him, but if Saitama was not here, after some break time, he would have stood up to fight Deep Sea King again. And Deep Sea King is seen as a S-Class Hero. 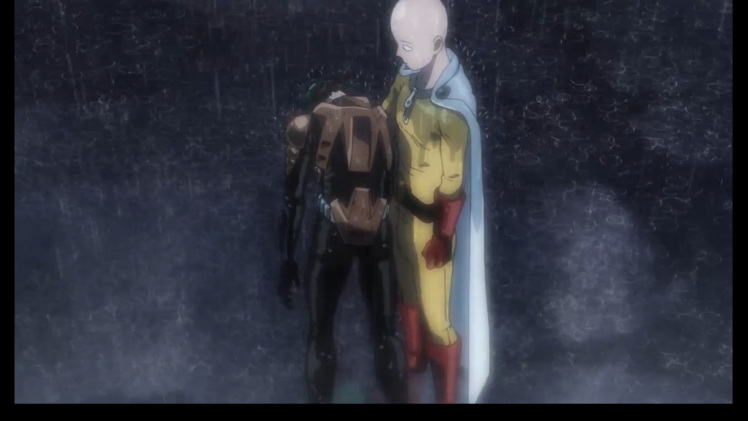 Another point is that it is indeed weird that Mumen Rider remained conscious after a whiplash from Tank Top Master. Even Garoh took more damages than him after such a punch. For me, the reason is that Tank Top Master had to hold back at the last minute, hearing the cry of Mumen Rider. ("Chotto Mattaaaaaaaaaaaaa")

He resisted the punch because he trained and trained, and he was injured, but there is more than just physical resistance we are talking about here. Mumen Rider had that "armor" on, which could have absorbed some, or most, of the punch, but nonetheless, he was knocked unconscious. This would state that Mumen Rider is good in protection, but not physical strength.

He looks weak, yes, and he is, but his body is strong, and he DID make it to be a hero. There is more that factors into a punch, than just the force, and how much physical resistance Mumen Rider had, for instance, there is the velocity. So lets say Garou punched him slowly, that means even if Garou flexed his muscles, it would have no effect, but if he punched him faster than Mumen Rider can see, or react to, then yes, he could have died, or could have been blown out of existence.

so therefor, Mumen Rider "resisted" the punch due to flexing his muscles (offers more protection than you may think), and buy standing there very sturdily, and that "armor" he wears also adds to his physical protection.

4
Why does the Hero Association ratings have several S-Class Heroes to be more powerful than Tatsumaki?
0
How could a B hero class like Fubuki defeat a dragon level villain?
1
Can heroes have any kind of powers in One Punch Man?
5
What is the source of superpowers in the One-Punch Man universe?
0
Which S class heroes are left in the Hero Association?
3
Why is Silver Fang rated as S-class Rank 3 hero?
0
Does Garou have some important techniques of his own?
1
Which S Class heroes can be hurt by firearms?
4
Where can I read the original One Punch Man