Who is the strongest esper in One Punch Man?

In One Punch Man there are several espers. One of them claims to be stronger than Tatsumaki. Is this true? Who is the strongest esper in One Punch Man?

Update: Gyoro Gyoro(Monster who created Orochi, the king of monsters) and described by Tatsumaki as a "Bag of Flesh" was actually as said, a doll controlled by an esper. While that esper goes by the name Psykos, nothing is revealed about her yet in the manga (Much less the anime).

Spoiler from the Webcomics:

In the Webcomics of One Punch Man (The most original version which is far ahead of the manga) created by the group One, shows the fight between Psykos and Tatsumaki. It is then revealed that Psykos was once a student/part of Fubuki's group and was nearly overpowered by Tatsumaki until the Cadets of the Monster Association attacked Tatsumaki. While defending herself against the Cadets, she didn't realize that Psykos was about to attack her until it was too late. After Tatsumaki was defeated by the surprise attack from Psykos, Fubuki comes in and attacks Psykos, which she comes out of victorious.

In conclusion, we could say that... (Spoilers)

Fubuki is the strongest because she won against Psykos who defeated the "strongest" esper Tatsumaki, but seeing as Psykos was weakened and Fubuki had focused her training on defense against overwhelming psychic strength, they all were strong in their own ways. Tatsumaki had the overwhelming resistance and raw power to crush enemies, while Psykos and Fubuki used subtle techniques like doll manipulation (Gyoro Gyoro), and scattering the psychic waves respectively. However, as User Gary Andrews 30 pointed out, Tatsumaki was shown to be more powerful in several more instances and Fubuki's simple scattering technique didn't count as power.

OP specifies in the comment that they are referring to claims made by Gyoro-Gyoro. Eventually Gyoro-Gyoro encounters Tatsumaki and they battle. The following will be spoilers for anime-only people, but at this point the encounter has happened in the manga, and is essentially the same as in the webcomic.

Turns out it's all arrogant bluster by someone who didn't grasp the true depths of Tatsumaki's power. 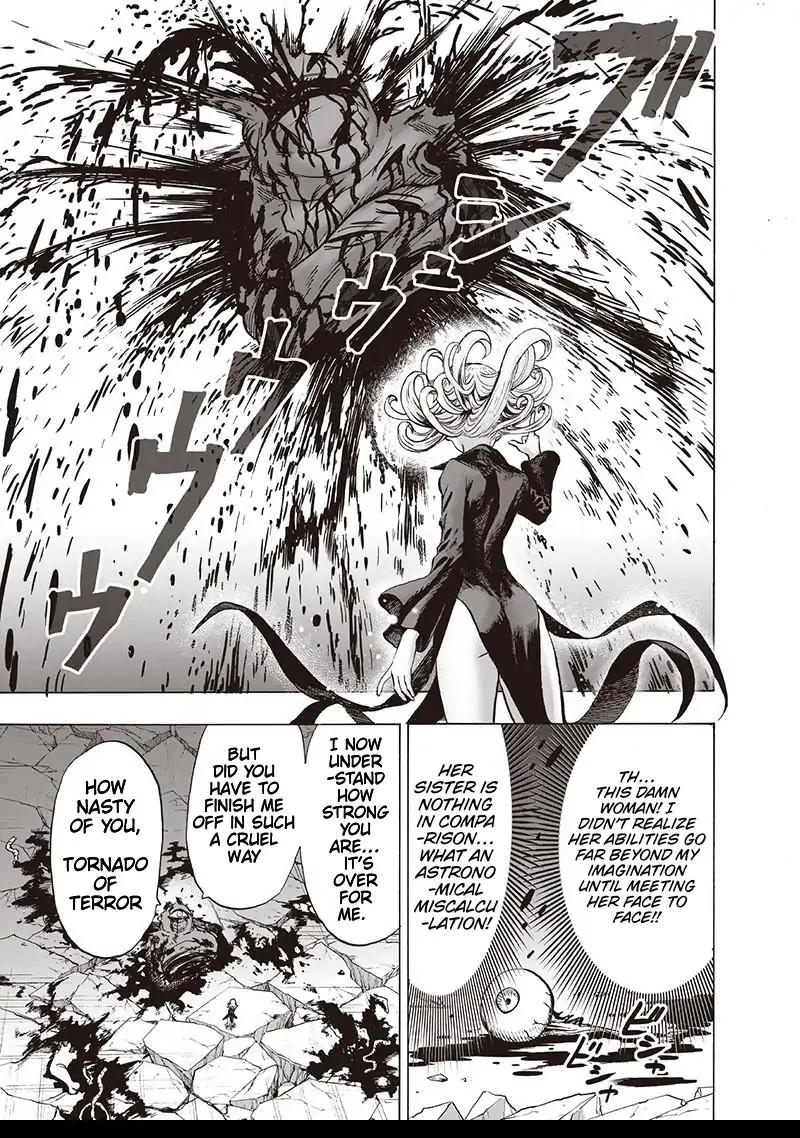 Though as mentioned in Sphinx's answer, in the webcomic Psykos, the real identity of Gyoro-Gyoro, tactically outmaneuvers Tatsumaki in a group battle by landing a sneak attack to disable her while she's about to crush several other Dragon rank monsters. This isn't a victory by esper ability, but one can certainly give her credit for knowing how to find and exploit an opening in Tatsumaki's defenses. Sphinx's answer is otherwise misleading as regards Fubuki, as in the same chapter her special technique is described it is pointed out that Tatsumaki mastered it as a child and has since adapted it into a weapon. That's the usual story of things: every new height Fubuki reaches is something Tatsumaki has achieved since childhood. Fubuki needed it to deal with Psykos's superior power. There's no indication that Tatsumaki ever needed anything more than her usual barrier to completely negate that power, though she's certainly aware of how to use that technique to do so.

Tatsumaki, and by a wide margin.

geryuganshoop + Melzargard + Groribas (Boros's three lieutenants) together have been stated to have very little chance against Orochi, even with prep time.

Gyoro gyoro is weaker than Orochi, but was just a meat puppet controlled by Psykos, Psykos plus a psychic enhancing drug was seemingly able to fight with Orochi at least mentally and has shown more impressive abilities than geryuganshoop and is probably stronger.

Orochi + Psykos + psychic enhancing drug + a boost by god + energy sucked up from the planet was absolutely outclassed by Tatsumaki.

The question isn't whether Geryuganshoop could fight Tatsumaki, it's whether or not Boros could.

0
How could a B hero class like Fubuki defeat a dragon level villain?