How can non-Japanese fans encourage continued anime or sequels?

What steps can non-Japanese fans take to support their favorite anime and encourage the studios to keep making the title (or make a sequel), assuming that there is more manga or light novel source material available?

I've heard it said that Blu-Rays are highly profitable, but I think it takes more than just profit to encourage sequels, follow-ups, additional cours, OVAs, etc.

For example, if I want there to be more Goblin Slayer, KonoSuba, Full Metal Panic, Log Horizon, etc. what could I buy or who could I write to ask for more?

I am not entirely sure that there is much we can do. One of the largest deteriminants is likely continued interest in the series, and if japanese viewership dwindles then the show might be canceled irrespective of what the western fanbase thinks, because japanese television networks need to satisfy their sponsors.

However, there are a few things we can try:

First of all, most anime is adapted from a different medium: there are visual novels such as Clannad and Fate/Stay Night, light novels like Slayers or Sword Art Online, and perhaps most significantly manga, like Sailor Moon, Dragonball z or Chobits. If the source material runs dry, the animated series might go alongside it, so you might want to take an interest in it. However, even an ongoing series might come to an end if the source material runs dry before the start of the next season. This is what happened with the original Fruits Basket anime for instance.

Secondly, if you can, purchasing Original Video Animation releases might help safeguard against a premature ending at studio whims, since those can allow a company to operate independently from television stations, and are often used as a way to continue producing shows that have stopped broadcast, as noted in The Anime Encyclopedia 3rd Revised Edition: A century of Japanese Animation by Jonathan Clements and Helan Mcarthy:

The anime historian Yoshiharu Tokugi suggests a slight semantic distinction between O.A.V. and O.V.A., in the sense that the former is a new work made specifically for video, while the latter may also refer to a continuation on video of a pre-existing TV show or movie franchise—such spin-offs were also known in Japanese in the 1990s as after-mono

This will be easier for people who share Blu Ray Region A with Japan, such as people in North America, since they can purchase blu-ray discs directly from Japan through importation services such as jbox, although it should be noted that anime is more expensive in Japan due to a different retailing structure.

Another is to take customer participation surveys. One of the questions they often ask is "What your favorite series?". These can be from a checklist, or a write in option. Writing in the series you want to see most demonstrates interest that directs what the company decides to license next, and it seems likely that feedback regarding which type of shows a distributor would like to publish.

Sometimes these are available online, such as the Fall 2012 Funimation Survey. Other times you might find them in a postcard bundled with the physical video. Here are a couple of survey cards from A.D.V. and Sentai Filmworks. 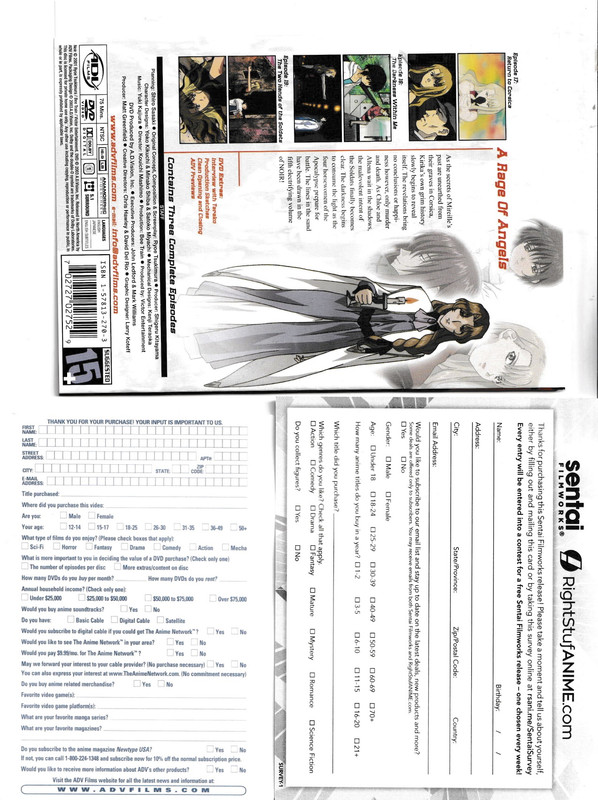 The A.D.V. card came packaged with Noir Volume 5: Rage of Angels (I.S.B.N. 1578132703), and two of the questions on it are "What are your favorite manga?" and "What are your favorite anime?", and most other such surveys have similar questions. However, you might not always see such a survey in the package: My copy of The Disapearance of Haruhi Suzumya from Funimation didn't come with one for instance, and even if you do get one the exact questions might vary. The Sentai Filmworks one only asks what you purchased for instance, and sometimes these are offered in the form of checklists that list the shows the company offers.

I suppose the reason they are there is to help distributors decide what to license next, or relicense, and perhaps if a series is known to be in especially high demand, it might come up during negotiations with the japanese animation studios and manga publishers. When you see such a survey, it will usually be like a postcard, with a marked place to put a postage stamp and a preprinted mailing address on the other side of it.

Another thing you might try is to watching licensed streams, even if you own the video in other static format. This allows you to be counted as a viewer multiple times, and demonstrates a continuing interest in the series. This adds to the number of people who are known to have watched a series from the first episode in a season through to the last, which may merit creating another season, if possible.

Besides having a pecuniary interest in showing their customers more of what they want, I think much of the unique appeal of this particular profession is showing the public something worth seeing or sending a message. When Miyazaki made his adaptation of Howl's Moving Castle, he did so with the intention of sending the public an anti-war message, and naturally trying to send a message is something you only do in anticipation of somebody receiving it. The wider the authors perceives the audience they are reaching to be, the more inspired they will be to create works for them.

Moreover, a series that does not fade from memory is one that is more likely to get a continuation even after being long dormant. Slayers Try and Slayer Next come to mind, and Dragonball Super does too.

An Aside on Merchandising

Merchandising can also play a rather significant role. In the Global History of Anime Rightstuf notes that in 2006 the market was oversaturated with anime, and that while series that had merchandising as an alternative revenue streams did fine, those that relied on video sales suffered as a result. I vaguely remember that Geneon U.S.A. went out of business at around that time.

In terms of other merchandising you can purchase, I would probably recommend buying premium merchandising, since that might engender an impression that you have deeper and more sincere appreciation for the subject matter than somebody who buys more cheap stuff on impulse, even if you are spending the same dollar value. Major majufacturers of figurines such as Good Smile Company and kotobukiya make some nice stuff, and Aniplex U.S.A. also sells premium goods such as canvas art.

You might also want to take interest in why an artist decided to start a series in the first place and see if there are any goods related to that. Touhou isn't quite anime, per se, but it is a closely related niche game series and Zun actually started the series as a way to start making music. It isn't unreasonable to suppose that he might value soundtrack sales more than game sales.

Most of the profit comes from merchandise. Blu-rays or DVDs by themselves even for famous titles are sold not very actively, at least this is definitely not enough to cover ~100k dollars per episode (which sum nowadays should be even higher).

Other than PVC figures and dakimakura, the popular shows will sell fashion items, action figures and dolls for kids, folders, binders, inspired jewelry, and limited edition food packaging. And that's how they make money.

So if you truly wishes to help them out, you can buy anything from above-mentioned (I think they'll receive more if it is bought straight from Japan, although there may be a need to order via an intermediate company if the shop doesn't ship to your country directly) and get a subscription to anime streaming services such as Crunchyroll.

Simply asking for more won't have any effect. That's what we, fans of Bleach, are doing for ages now, even the studio members said they want to produce the continuation but the high-positioned staff isn't planning it yet.

It also depends on how occupied a studio is. I have predicted that the S2 of Re:Zero will be announced after Goblin Slayer stops airing, this means that until they release the continuation of Re:Zero there definitely won't be the second season of Goblin Slayer.

Monitor the popularity of the source of a certain anime. It can often say if there can be any continuation in theory.

2
What decides that a anime series gets a sequel or not?

23
Are anime and manga subsidized or actively used by Japanese government to promote Japanese culture/relations internationally?
4
Is it common for Japanese otaku fans to create AMVs?
4
Can fans convince a streaming site to show a certain anime?
5
How is it that non reliable mangakas get work again and again?
11
Are non-Tokyo dialects common in anime?
10
How can I check that a given anime is really over?
1
How can you differentiate between the different types of anime?
0
What's up with anime movies that are really sequels to series instead of adaptations from scratch?