Which threat level was Garou when he defeated Tank Top Master?

As far as I understand, Garou got stronger during the series. How strong was he when he fought Tank Top Master? Which threat level was Garou when he defeated him? 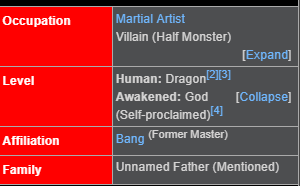 There's no way to gauge exactly how strong he was when he defeated Tank Top Master but seeing as he defeated several heroes successively in a short span of time, I'd say he has, more or less, similar capabilities as that of higher ranked S-class heroes.

0
Which threat level is Garou?
2
Can Mumen rider resist a S Class hero punch?
0
Which are all the S and A class heroes whom Garou fought?
2
Which version of One Punch Man is more expanded, the webcomic or the manga?
1
Which heroes in One Punch Man defeated dragon-level monsters?
0
Which chapter/version of One Punch Man the battle between Tank Top Master and one of Bofoi's drone is in?
5
What is the source of superpowers in the One-Punch Man universe?
0
Does Garou have some important techniques of his own?
0
Was Suiryu or Garou who defeated Saitama in Virtual Reality?