What language does Feitan speak when activating Pain Packer?

What language is the vertical text on the right? 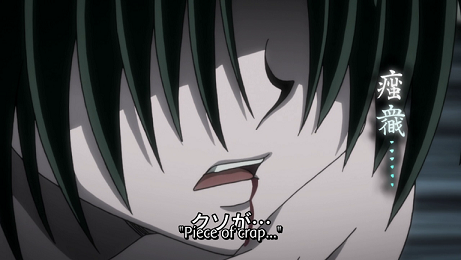 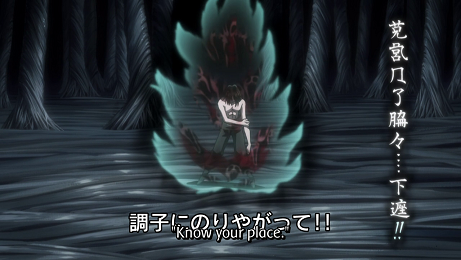 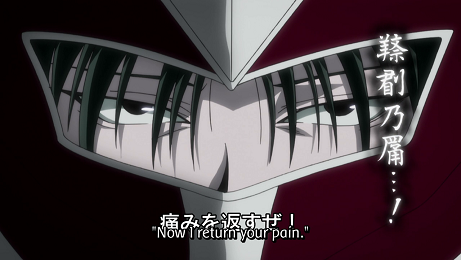 According to the Hunter x Hunter Wiki:

Feitan's first language is Chinese; he speaks in sentence fragments in Japanese while switching to his native tongue when angered.

Preface: I don't know anything about Hunter x Hunter, so I have no idea what language Feitan is "actually" speaking in the context of the show. It is entirely possible (as far as I know) that Feitan speaks Chinese, and that the captions are supposed to represent some variant of Chinese that exists in-show or whatnot.

That said: the captions that accompany Feitan's speech are most likely not a real language. I know Japanese well enough to tell you it's not Japanese; a bit of gruntwork in Chinese and Vietnamese character dictionaries suggests it isn't either of those; and if it isn't Chinese, it can't be Korean hanja either, since hanja are mostly identical to Chinese hanzi. It's possible that the script there is a more esoteric derivative of hanzi, e.g. Sawndip, but I doubt that's the case.

As evidence of this, we observe that the captions contain the character 々, found only in Japanese, as well as a number of other probably-untypeable characters, which are not found in Japanese. Since the language must be 1.) Japanese; and 2.) not Japanese, we are forced to conclude that language is not a language at all.

That said, the characters in the caption are very evocative of hanzi (particularly insofar as they appear to be built from standard Chinese radicals), and were probably consciously designed to appear Chinese while not actually being Chinese. Note that some of the characters that appear are real characters in Chinese - in particular, 了, 下, and 乃. The rest don't seem to be, though.

He speaks normal Japanese.. But backwards. You can see this clearly at 17:12 where the Japanese subtitles say "どうした" (do u shi ta) and he says "tashiudo" (ta shi u do) which is what you would get if you read the hiragana backwards.

The characters on the right are gibberish that is written to look like Chinese. As many have said, some characters used are viable in Japanese, some viable in Modern Chinese, possibly some viable as obscure ancient Chinese not sure, but mostly it's constructed from legitimate parts to form gibberish. It's the equivalent of writing "angsk ville ast, arg be yous being may kis dangeroust stranger ous" Kind of looks like English with some viable parts to anyone who doesn't know English, but is generally gibberish.

Yeah, it's definitely not purely Chinese, Chinese is my mother tongue and I've never even seen some of these characters before. They do have the characteristics of kanji and Chinese characters but I'm pretty sure the creator wanted to make an entirely new language.

I believe he is speaking inverted Japanese, and the text on the right is Japanese kanji. I'm Chinese, and I can read Chinese characters, so hopefully, my brain isn't exploding and I'm right. :)

PersonPerson
1
1
Add a comment  |
Highly active question. Earn 10 reputation (not counting the association bonus) in order to answer this question. The reputation requirement helps protect this question from spam and non-answer activity.

9
What happened to Retsu's doll at the clothing shop?
8
What's Meruem's nen type?
9
Does Killua have a crush on Gon?
3
Where is it mentioned that Gon didn't get his Nen back after being healed by Something/Nanika?
3
Does Wing also developed the ability to transmute his aura into electricity?
0
What is the violin soundtrack that plays in episode 47 when Gon receives Ging's tape?
2
Why does Feitan torture when Pakunoda can search someone's memory?
2
In what episode does Killua meet Netero who is getting ready to fight?
4
Kurapika's initial disrespect for Leorio, "Rewolio"
0
Mysterious black hands on chapter 383 of Hunter x Hunter