Was Krillin based on the Turkish folk character Keloglan?

I recently learned of a folk storybook character in Turkish culture named Keloglan. He is a bald child that uses his wits to get out of tough situations: 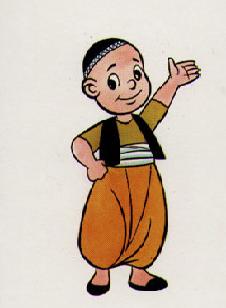 I was pretty struck by how similar he looked to Krillin in Dragon Ball, and it made me wonder if Krillin was based on this character. Some reasons behind my suspicion:

1) The names are remarkably similar: The Turkish pronunciation is keh-lee-o-lan, and the Japanese name seems like a very likely transliteration of this name.

2) Goku was based on a folklore character (the monkey).

3) They look quite similar, and share their primary physical characteristic (baldness).

Is there any information about whether Akira Toriyama used Keloglan as an inspiration for Krillin in the Dragon Ball series?

This seems to be a coincidence.

Like most characters in the series, the name Krillin is a pun. In his case, its Japanese source, Kuririn, is made up of two parts. The first two syllables come from 栗 (kuri), which means "chestnut" in reference to his shaved head (the "chestnut" pun is also carried over to his daughter Marron). The second part of his name comes from 少林 (Shōrin; "Shaolin" in Chinese), as his early character designs were closely modeled on Shaolin monks.

So, the similarity to the name Keloglan looks like a coincidence.

Regarding the baldness, as is pointed out by @krikara, this is probably because he is a Shaolin monk. Note that Krillin can grow his hair, whereas Keloglan cannot.

Even so, Krillin does not have a counterpart in "Journey to the West", so it is possible that Akira Toriyama looked to other folklore for inspiration when creating Krillin.

5
Was Majin Buu able to turn people into physically anything?
3
Why didn't Krillin and Gohan store the Dragon balls in a capsule?
3
Why couldn't Goku use the Nimbus to rescue the Ox King from the fire?
11
What does the Namekian password for the Dragon Balls translate to?
2
Who's the girl on the cover of chapter 67?
2
Why was the nudity not censored in Dragon Ball?
4
What was the first time when Krillin witnessed Kamehameha wave?