Fate/stay night. Why is Saber called a King and not a Queen?

Can anyone explain why Saber is called a "King" and not a "Queen"? It's obvious that she is a female and the proper title for a regal female is "Queen".

from bit and pieces of my answer here

Merlin, an Human/Incubus Hyrbid and a powerful Magus, had prophesied that their next child would be Uther's successor as king and Uther believed this. However when Arturia was born Uther despaired as she was born a girl, not a boy. in those times a King could not make a child that was not male his successor even if she was fated to one day become a king. Merlin was delighted because the sex of the child had never mattered

Kay could tell that Arturia would grow up to be a beauty woman but his father told him to guide her like she was his brother and decided to treat her in that manner, though he did not believe it would be kept secret.

While being raised by Ector Merlin also visited teaching Arturia and acting as a sort of foster father figure to her. he also also revealed Arturia's gender to Kay making him swear to secrecy.

during this time Arturia had to deal with the problem of being able to produce an heir. to "help" Merlin used his magecraft to make Arturia into a pseudo-male capable of producing sperm for an unknown duration of time.

so for the most part while Merlin never said that the child would be a boy effort was made to make it seem as if Arturia was one because of the age she was in. after all the fact that gender wasn't mention makes it perfectly fine that in another timeline King Arthur is male with no change to the prophecy

Also in the Visual Novel Shirou notes the legend of King Arthur is ambiguous who Arthur was saying that one legend suggested that Arthur was actually a group of people. so her legend isn't perfectly clear anyway compared to the stories that are out there.

there is also Arturia's own opinion about herself 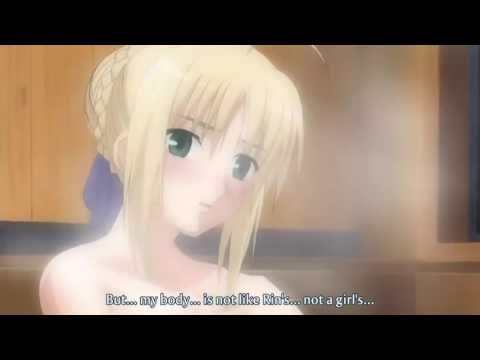 in both Studio Deen's anime and the Visual Novel there is a scene where Shirou walks in on Arturia having a bath in which she expresses that she doesn't have the body of a girl and later on when Arturia and Shirou go out into town they get into a fight where Shirou gets angry at Arturia not seeing her own femininity while Arturia argues that her femininity is pointless for a Servant and King.

Not the answer you're looking for? Browse other questions tagged fate-series or ask your own question.

14
Why is King Arthur female? Why is Iskander tall?
7
What is the complete story of King Artoria in Fate?

3
Have characters' voice actors in Fate/ always been the same?
3
How can the counter guardians die?
1
Where there any other Master who didn't know their Servant's identity from the start?
2
How does Saber's summoning to the Fifth Grail War work?
6
Does Fate/Strange Fake take place in the same timeline as any of the Fate/Stay Night routes?
14
Is Violet inspired by Saber?
6
Why is Saber the "strongest class"?
6
How is the holy grail war from Fate/ Stay night kept a secret?
1
Karna's prana consumption