Can someone explain Leorio's wager with the prisoner?

In Season 1 Episode 10, Trick x to x the Trick, Leorio wanted to bet on whether the blue guy was unconscious or not. At the time of the wager the prisoner was down 40-60 against Leorio. 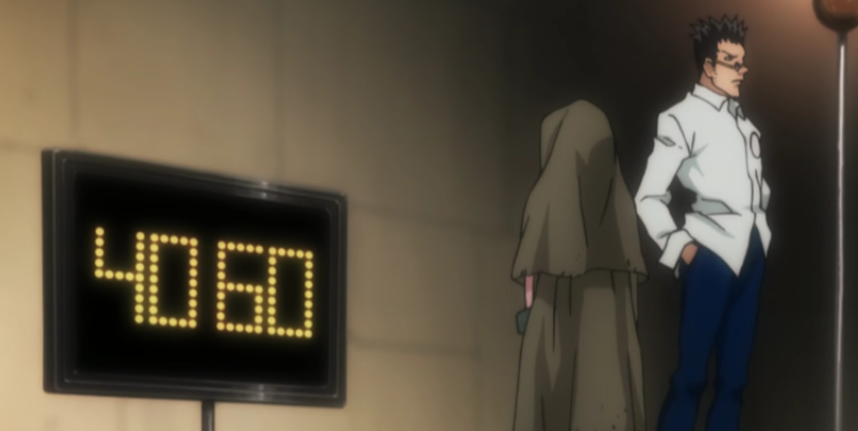 PRISONER: Now, it's your turn to wager. What would you like to bet on?
LEORIO: Well... I'd like to bet on whether he's really unconscious or not.

Just before Leorio lets go of the blue guy, the prisoner says:

PRISONER: I bet 40 hours that he's unconscious. I'm betting all the time I have left.

Leorio lets go of the blue guy and of course he wasn't unconscious yet the prisoner was still awarded with 40 hours!!

After the prisoner was awarded the 40 hours, she says,

PRISONER: But now, you only have 20 hours of bargaining chips.

So they definitely made it seem like Leorio lost the wager, but clearly the prisoner did!

Why didn't the prisoner lose right then and there? Shouldn't that have been the end of the match?

You missed some parts. In Chapter 20 of the manga, when Leorio proposed the bet, the prisoner said:

This would mean that Leorio's bet automatically is that he's not out cold. When Leorio was about to let go of the guy playing dead, the prisoner changed his mind.

Leorio: Look, if he yells out while falling...we'll accept that Kurapika's lost on a foul. You'll get the win. That seem fair to you?
Prisoner: Yes, quite fair. But I'd like to change my bet. Let me put 40 hours on him waking up.

So, Leorio's bet was changed to the guy not waking up due to this last minute proposition. Therefore, he lost.

1
How will Gon continue fighting after his fight with Neferpitou?
1
What is the song in Hunter x Hunter when someone is about to power up?
0
Can Shizuku's vacuum cleaner suck nuclear weapons?
4
When did Kastro dirty himself with blood?
2
Why does Feitan torture when Pakunoda can search someone's memory?
1
Why did Majitani's surrender not count in his Trick Tower fight with Kurapika?
0
Did someone replace Uvogin in the Phantom Troupe?
2
Can hunters change their specialization through training?
3
If someone surgically replaced their eyes with Scarlet Eyes, would they get the same specialisation power like Kurapika?