Which S class heroes are left in the Hero Association?

In the last chapters of the webcomic is shown some Heroes retired and others moved to the Neo Heroes.

Which S class heroes are left in the Hero Association?

This answer will be spoilers for anyone not mostly caught up to the latest webcomic chapter, of course. It will be easier to list those who left.

Last warning about them spoilers...

Honorable mentions: Genos was going to join the Neo Heroes until Saitama rejected the idea of joining them. We also see two people that HA recruiters were offering S-class positions to if they joined (a sumo wrestler and a leader of a mercenary troupe), but both of them were already set to join the Neo Heroes. In chapter 107 we learn that several of the Tank Toppers have left the HA (possibly joining the Neo Heroes), including Tank Top Vegetarian (an A-class).

In chapter 110, one of the administrative people with the Neo Heroes, who had previously been with the HA, says they've had many more defections across the rankings and classes of the HA. But we haven't seen any of them to date. 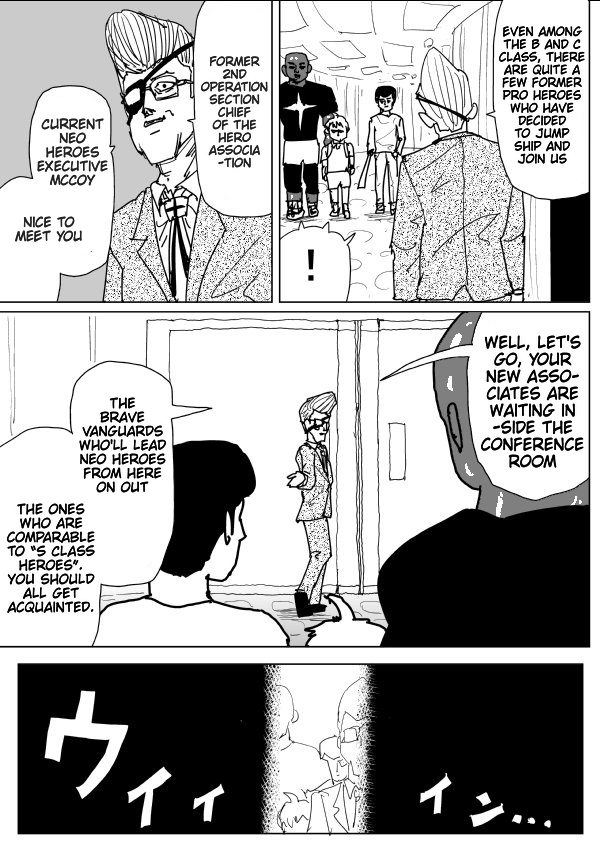 Given the structural setup of the sequence of events leading up to this point—early in the chapter we have a "wait, they're not the only ones leaving..." from an HA administration person, then it cuts to Metal Bat, Child Emperor, and Darkshine at the Neo Heroes—it is strongly suggested that the above list is currently complete. There are several other S-class heroes who seem to either be on a short leash or have doubled down on training in the wake of their defeat in the Garou fight, but none of them have clearly left the association or been removed from it to date.

4
Why does the Hero Association ratings have several S-Class Heroes to be more powerful than Tatsumaki?
0
Is there a specific anime category for shows like One Punch Man and My Hero Academia?
0
Which are all the S and A class heroes whom Garou fought?
0
How could a B hero class like Fubuki defeat a dragon level villain?
1
Why Saitama was so poorly promoted after he defeated this insanely powerful enemy?
5
What is the source of superpowers in the One-Punch Man universe?
1
Why is Genos directly promoted to S rank and surpasses Amai Mask?
1
Which S Class heroes can be hurt by firearms?