Why isn't Hachikuji surprised by the fact that Araragi is a vampire?

Hachikuji does not react at all when Araragi discloses to her that he is in fact a vampire. Vampires are very powerful and dangerous kais in the Monogatari universe.

The picture below is the exact frame when she learns this, in Nisemonogatari (Karen Bee) episode 1: 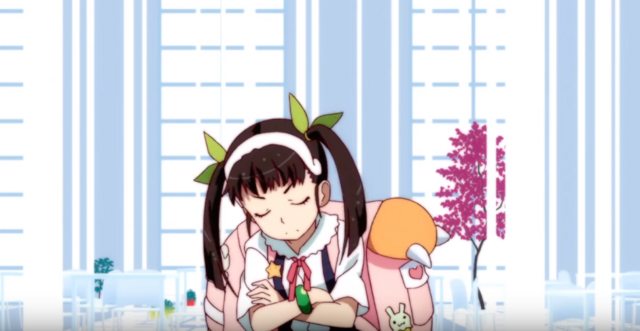 Why does she not react at all and also never touch this topic further in the series?

First off, it's unclear whether or not this truly was the first she had heard that he was a vampire. My Japanese isn't good enough to tell if this is a fault in the subtitles, but he seems to introduce it on the premise that he had probably told her already, and her response seems fairly neutral as to whether or not he actually had. However, in the case that he hadn't, she still has plenty of grounds on which to be less than shocked:

In Mayoi Maimai, although the severity of the wounds may just be anime-original visual flair, she inflicts several serious scratches and bites on him which are shown to then rapidly heal. Although she does not remark on this, she may on some level have recognized that he had supernatural powers of regeneration.

In Tsubasa Cat, she recounts that she (correctly) thought she recognized Shinobu at a Mister Donut, without having ever actually met her before, and that she figured that Oshino Meme would not have let her wander the town. This implies that Araragi had definitely mentioned her and some of the circumstances surrounding her to Hachikuji in prior conversations which occurred off screen. Depending on how much of the circumstances he revealed, it may have been possible to infer more or less the full picture of what happened between them, but if nothing else she knew that he was in some way involved with a vampire. (Furthermore, when he later recruits her to search for Shinobu, she expresses no reservations about attempting to make contact with a vampire.)

Lastly, regarding why vampirism would not be inherently alarming, recall that knowledge of aberrations is far from widespread, and not conferred automatically to aberrations themselves. Anything Hachikuji would have heard about aberration lore would be from Araragi himself, and there's no indication that in-universe vampire legends are any different (or even more cohesive) in some way that would clearly place them on top of the figurative food chain.

14
Why do people keep seeing Hachikuji?
3
Why did Nadeko use different names for Araragi?
13
Are all apparitions on Monogatari based on actual stories?
5
Why don't Araragi and Senjougahara call each other by their given names?
18
Who are all the girls fawning over Araragi?
5
What exactly is the relationship between Araragi and Shinobu?
8
In the Tsubasa Cat arc, when did Hachikuji meet Shinobu?
2
How did Araragi become tolerant to the sun?
3
How did Araragi Koyomi lose his vampire powers in the Monogatari Series?