Oreki is a usually lazy and energy-saving kind of guy. After meeting Chitanda, Oreki is unable to refuse her requests. Why can't he refuse it? Is this because he is in love with her or is it a form of hypnosis? 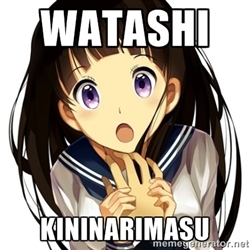 First things first - no, it is not a form of hypnosis. Hyouka is entirely devoid of supernatural elements. The notion is absurd on its face.

Anyway, why can't Houtarou refuse Chitanda? There are a few reasons for this, and they change over the course of the show.

Let's take a look at episode 1. When Chitanda asks Houtarou to help her find out why she got locked in the room, we get that scene where Chitanda's hair captures Houtarou. This is, of course, a representation of how Houtarou views the situation at hand, and suggests that there was something very persuasive about the way Chitanda asked him. If we turn to the novel's version of this scene, we find that:

Chitanda's eyes held some sort of strange power, one that forbade me from giving her an offhand response. Her gaze overwhelmed me, and left me sounding like a fool.

As this suggests, at the very beginning of the story, Houtarou is spurred to action not out of love for Chitanda or anything, but rather by Chitanda's immense force of personality.

In episode 15, we see that Chitanda has more or less the same effect on Masashi Tohgaito when she's trying to get him to include the Classics Club in the next issue of the wall newspaper. (Irisu suggested that she use her feminine wiles, but Chitanda didn't really manage to pull that off.)

Houtarou is a pragmatic person

In the second half of episode 1, Houtarou has Satoshi help him fabricate the story of the secret club. Why? Because, as he himself notes, if he hadn't, Chitanda would have dragged him off to the music room to investigate the so-called ghost that supposedly appeared there. In a sense, he chose the better of two bad options.

While they wait for the librarian in episode 2, Chitanda becomes curious about why the school history book gets loaned out every day. At first, he tries to get Chitanda to stop pestering him, but soon realizes that refusing her any more would actually be more costly than just acceding to her demands.

Houtarou, being a very pragmatic sort of person, will sometimes do a small amount of work in order to avoid having to do even more work.

In episode 2, Chitanda actually grabs Houtarou and drags him to the library to search for the club's archived anthologies, thus justifying his fear in the second half of episode 1 of being forced to go all the way to the music room. Later in the episode, with the mystery of the frequently-returned book, Chitanda shoves the book in Houtarou's face until he finally gives in.

Point here is, Chitanda can be a pushy kind of person.

Sometimes, Houtarou just doesn't have anything better to do

As his sister notes in her letter from Varanasi, Houtarou should join the Classics Club because (if for no other reason) he isn't doing anything better with his time. In episode 3, when Houtarou agrees to help Chitanda out (to a certain degree) with the matter of her uncle, he thinks back to his sister's letter and figures that indeed, there's not really any good reason for him to say no - as long as it doesn't involve going too far out of his way.

In episode 20, when Chitanda invites Houtarou to visit the Arekusu shrine on New Years', he again agrees, mostly because he doesn't have anything better to do. (His thought process is elucidated upon a bit more in the novels, making it clear that this was mostly why he agreed to go.)

These are more or less the reasons why Houtarou does anything towards the beginning of the show. As Houtarou develops, though, he starts developing other motivations.

In episode 18, Houtarou decides he wants to look into Mr. Ogi and why he was struck by lightning thrice, and hence goes out of his way (all the way to the public library) to learn more about the matter.

This is presumably a result of Chitanda's influence on him over the preceding months (not that Satoshi, Ibara, and others didn't play a part either). He's different now than he was at the beginning, when he was wholly devoted to his tenets of energy conservation.

In episode 21, we see Houtarou flustered when when Chitanda tells him that, in her family, it is customary not to give gifts to people who they are truly close to. Later in the same episode, Houtarou's anger with Satoshi over the stolen chocolate incident by and large is due to the fact that Chitanda was hurt by the incident.

And, of course, in episode 22, Houtarou imagines telling Chitanda that he'd be willing to take on the business side of things to help her out. He then realizes that the way he felt as he thought about that might have been how Satoshi felt when he chose to break Ibara's chocolate in the previous episode. This can be interpreted in various ways; one possible (and common) interpretation is that he realizes he's fallen for Chitanda.

So yes, towards the end of the story, it's possible that Houtarou is motivated by love for Chitanda, but towards the beginning, he's more pragmatically-motivated than anything.

senshin♦senshin
34.1k2121 gold badges129129 silver badges235235 bronze badges
1
Add a comment  |
5
Want to improve this post? Provide detailed answers to this question, including citations and an explanation of why your answer is correct. Answers without enough detail may be edited or deleted.

Chitanda possesses a pure and almost childlike curiosity which helps to unlock Oreki's, which he suppresses.

Senshin's answer is great and covers all the basics very well, but I think there is a more subtle element in Oreki's mind that doesn't allow him to refuse Chitanda's adventurous nature.

Note: I haven't read the novel, and my point of view is based solely on the anime adaptation.

Throughout the series we see how Oreki starts out as a passive chill guy who seemingly doesn't waste his talents on anything bothersome, although he actually often does some things that are evidence to the opposite.

Whenever Chitanda says she's interested in something, it looks like she is voicing Oreki's own thoughts. She does it so avidly, in fact, that he is unable to resist his own will boosted by Chitanda's personality.

In my opinion, Oreki never was that much opposed to interesting things. Look at him read stuff all the time. And he's pretty knowledgeable, too. How could a person disinterested in everything know that much? And with Chitanda's help he could finally unshackle from his chains of passivity, become who he was truly meant to be − a detective. Of course he couldn't resist Chitanda after she helped him through all that.

3
What does Oreki Houtarou want to do with his life?
3
Oreki and Chitanda's relationship in the anime Hyouka
5
What does “Why didn't she ask EBA” mean in Hyouka?