Ask Question
Asked 6 months ago
Active 6 months ago
Viewed 914 times
-1
This question already has an answer here:
Which heroes beaten up by Garou died? (1 answer)
Closed 7 months ago.

When Garou fights heroes does he actually kill them or just severly injure them. If he killed them then that will leave the Hero Association at a huge loss and in previous episodes

When Garou fought the 8 heroes in Gatling Gunner's squad it seemed like some of them died.

Does he actually kill heroes?

No, he severely injures many of them, enough to require hospitalization, but there are no actual hero kills associated to Garou. His initial appearance is probably his most murderous looking, though: he clearly severs Blue Flame's arm clean off (which can very easily be lethal), for example. He even talks a lot about how he's going to kill everyone there, hero or not. Possibly Garou was originally intended to be legitimately murderous, but these behaviors are still consistent with the fear he wishes to instill everyone with.

The Monster Association calls him out on how he claims to be a monster but yet doesn't kill any heroes. That's why they demand he actually go kill a hero to properly join them. Garou, however, doesn't much care for their demands. He sees it as, at best, stereotypical and lame monster/hero dynamics, one of the things he's looking to upend and subvert; and at worst that wanton murdering (especially for social conformity) is not even consistent with what monsters should be doing.

Much later in the webcomic

Saitama also calls him out on not having killed anyone, saying he must have intentionally fought everyone in a way that they could survive. Earlier he calls Garou a big softy. Later he posits that Garou just wanted to be a hero, but found it difficult and gave up and took the easy way out of being a monster; he just couldn't shed his desire to not kill people. 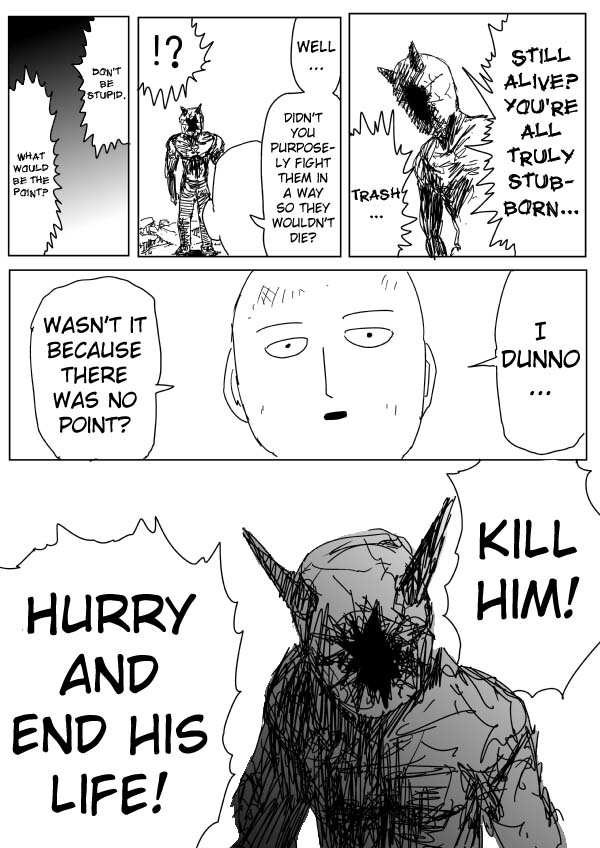 You can see here in the last panel that the S-class heroes are demanding his death. This is meant to contrast the faults of the so-called heroes versus the ideals of Garou and Saitama. That was much of the point of this story arc, in fact: to subvert the Hero genre and point out its flaws and failures, both at individual and societal levels. Saitama just sees Garou as a human who beat some people up, so won't kill him, while the "heroes" are all murderously incensed.

0
Which heroes beaten up by Garou died?

0
Which threat level is Garou?
5
How does S-Class heroes' power compare to threat levels?
1
Does Saitama have any friends outside the heroes ones?
0
Which heroes beaten up by Garou died?
1
Is Garou actually evil?
0
Which are all the S and A class heroes whom Garou fought?
4
What is the source of superpowers in the One-Punch Man universe?
0
Does Garou have some important techniques of his own?
5
Why did garou get orange hair?