What is the difference between Tachikoma and Fuchikoma?

Actually, the Tachikoma was introduced because of license-issues - the Fuchikoma couldn't be used in the SAC. 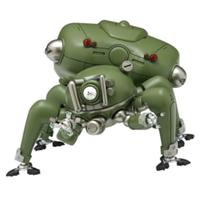 Also, the AI is a little bit improved, which leads to the fact, that Tachikomas are more human-like and also defend their human partners more. In SAC, it can be seen, that the Tachikomas don't mind risk and are happy most of the time, while the Fuchikomas were more serious.