If Itachi used Izanami on Kabuto, then how does his Mangekyou Sharingan work?

So reanimated Itachi used Izanami on Kabuto. He then uses Tsukuyomi later. How is this possible?

I'll have to clarify a few things before I answer this question so it is completely answered.

The Izanami is an ocular genjutsu of the Sharingan, that is designed to trap an opponent without eyesight. It was developed to save and reprimand an Izanagi user, for they couldn't handle their power and eventually abused it during battles.

Both Izanagi and Izanami result in the loss of vision in one eye, until used by the other. Madara used Izanagi in one eye to come back to life after defeated by Hashirama Senju. This resulted in the loss of one eye, but his vision was then restored when he awakened the Rinnegan after implanting Hashirama's cells into himself with the intent of getting Wood Style. 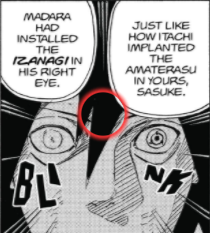 As shown, only one eye turned white and the other Sharingan remained.

Itachi used Kotoamatsukami to stop Kabuto's influence on him with the Reanimation Jutsu, as it was set to activate once Naruto looked at Itachi's eyes, thinking that Sasuke would implant them. And Itachi had two Sharingan, meaning that Izanami would only blind him in one until he used it in the other eye as well. He then cast Tsukuyomi with the remaining eye, and thus could use it after using Izanami.

Itachi set up the Izanami preparation in Tsukuyomi mode, so if Kabuto will be trapped in the loop in Tsukuyomi as well.

5
How did Itachi awaken his Mangekyou Sharingan?
6
Why did reanimated Itachi lose eye vision after using Izanami?
2
Is it possible to cultivate Sharingans?
3
How can Itachi use his Mangekyō Sharingan after death?
6
How does Edo Tensei Madara get back his Rinnegan?
5
How did Madara fake his death during his battle with Hashirama?
8
How did Madara really obtain his Eternal Mangekyou Sharingan?
1
Why doesn't Sasuke try to kill Kabuto after he releases Itachi?