Which chapter depicts Doraemon and Nobita on Easter Island?

This one is from a Doraemon manga and the story appears to be called 'Battle on Easter Island'. 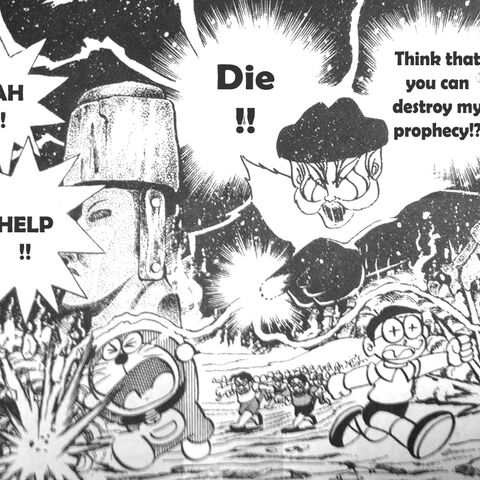 Which Chapter is it from and how can I purchase/acquire a copy?

The "Battle on Easter Island" appears in the 3rd chapter of "The Devil of Time and Space" arc (時空の魔神), in the 2nd volume of The Doraemons Special (ザ・ドラえもんズ スペシャル) manga.

Nostradamus the prophet, who was sealed, escapes from the space and time dimension plot to make his prediction come true about the world's end in 1999. It is up to Doraemon, Nobita and the gang to stop him.

The panel on the question depicts Doraemon and Nobita on Easter Island being attacked by the people who are under the influence of Nostradamus, and Nostradamus himself attacking the group with a rain of thunder.

The series has not been licensed in English, so there's no way to acquire it legally. However, for the original Japanese language, it can be purchased on Amazon.