Why does Naegi always appear in the closing credits along with the dead characters?

In most closing credits sequences of Danganronpa, a picture of some characters in a classroom appears.
These pictures always feature Naegi, along with the characters that die along the show. 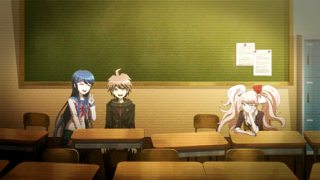 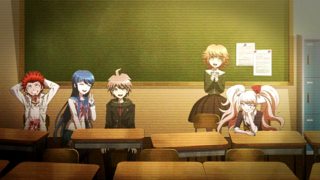 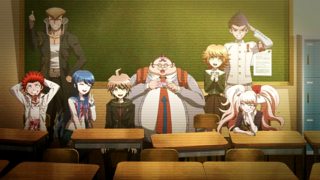 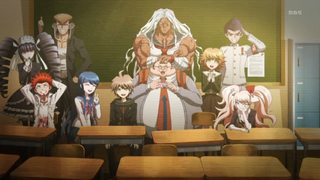 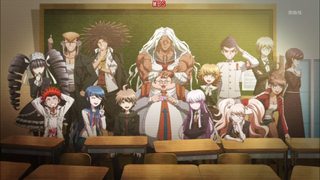 Except for the last one, which shows all 15 students, these feature the characters that died either on that episode or on the previous one (which had no ending sequence). However, Naegi seems to always be featured in these photos.

Is there any particular reason for this? Or is it simply because he is the main character?

I was wondering this myself. I think there's a theory that Naegi is actually dead and this is his purgatory. We never find out what the most despair inducing event in history is because Naegi died before he could find out. He's the one who has a pretty generic high school ability. Hopes peak academy could actually be the test whether he makes it to heaven or hell in the afterlife. When they all leave we just see a shining light but no sense of the outside world.

If you think about it, the school is perfectly looked after and the fridges are all restocked daily. But who could do that? If instead we picture it as a purgatory scenario it just sets the stage for Naegi to show he can overcome despair.

I think he shows up in the ending credits along the dead characters to show that he's actually dead and when they all appear at the end it means they were all dead. But they made it to the afterlife.

I think it is because of them being his classmates because if you look in the game, near chapter 6 it showed them being students before the killing game.

It is shown in Danganronpa 3 Future that Makoto blames himself for all their deaths and feels he should die when he watches the despair video. That’s probably why