What is this anime or manga about "Leben Nicht"? [closed] 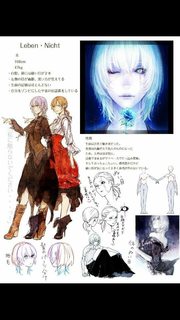 It shows a girl with white hair next to a girl who I guess is her except the white-haired version almost looks like she went through a Frankenstein surgery with her skin having scars and such. It looked interesting to me but I can't find it anywhere. It had Japanese writing but I don't read Japanese.

Does anyone know what this anime or manga is?

This seems to be an original character by artist 浦助 (Urasuke), sometimes known by other names such as "ursk420" or "tetsu420". It was posted to his pixiv account roughly a year ago (standard disclaimer: Pixiv links are not guaranteed to be work-safe since the content is dynamically generated). The character's name is Leben Nicht (German meaning roughly "not alive"). The caption for the picture and the tag "オリジナル" ("original", used when a character is not part of any series) both indicate that there isn't any anime or manga about the character, so unfortunately it seems you're out of luck on that end. However, the picture was released such a way as to allow essentially unlimited derivative works, so you may be able to find more images of this character.

I don't think this artist has been involved in any other professional manga or anime to date, though it's hard to tell. At the very least I couldn't find references to any such works after skimming his pixiv page, blog, interview page and twitter. He does have a sizable following online, but according to his pixiv profile he mostly draws original characters.