What's the difference between the FMA and FMA Brotherhood series?

I haven't watched Anime in many years, but recently I've had time to get back into it. I've seen that one of my favorite series, Fullmetal Alchemist, has done a series reboot. What I'm wondering is:

Does it present a lot of deep variations (plot-wise, character-wise or otherwise), or is it just the same series with updated art?

There are a large number of differences between the two Fullmetal Alchemist anime, with far too many to list; therefore, I'll only cover the major ones.

To improve the flow of this answer, the following abbreviations will be used:

The reason for the difference is because FMA03 was created when FMAM was still in the early stages of its development. When an anime series is based on a manga that is still in development, the anime is eventually going to reach a point where it outpaces the manga, because anime episodes tend to be developed quicker than manga volumes. When this happens, either filler for the anime is created or changes to the anime's storyline and characters are made so that the anime can continue to be developed. The latter is what happened to FMA03. FMA03's storyline started to diverge from FMAM's storyline after around 10 episodes because, at that point, the anime was starting to outpace the manga.

On the other hand, FMAB was created when FMAM was nearing the end of its development. This allowed FMAB's storyline to be more faithful to FMAM's storyline because FMAB had a mostly-complete storyline to draw from FMAM.

The major differences between FMA03 and FMAB & FMAM are:

Although both stories follow Edward and Alphonse, the overarching story is considerably different between FMA03 and FMAB & FMAM. In FMAB & FMAM the main antagonist was a character referred to as Father, a being of incredible power who is capable of performing transmutation at will, and without regard for equivalent exchange. His ultimate goal in FMAB & FMAM is to steal the power of what he refers to as "God" and become a being of infinite power and knowledge.

The main antagonist in FMA03 is Dante. Unlike Father, she is just a normal human being who created a Philosopher's Stone and has managed to live a long time by transferring her consciousness into the body of other human beings whenever she was nearing death. Dante's only motivation is to become immortal and live forever.

In FMA03, the Homunculi were the result of attempting to perform human transmutation and failing. They could only be killed by destroying their original body.

In FMAB & FMAM, the Homunculi were created by Father, with each one representing a different aspect of his personality (Lust, Gluttony, Envy, Greed, Wrath, Sloth, and Pride; the seven deadly sins). Each Homunculus is also powered by a Philosopher's Stone. Unlike FMA03's Homunculi, FMAB & FMAM's Homunculi do not have an "original" body that needs to be destroyed. Instead, either the Philosopher's Stone powering them needs to be destroyed or its power drained (normally through forcing them to regenerate multiple times).

Another difference is the identify of the Homunculi themselves, with some Homunculi from FMAB & FMAM not appearing in FMA03 at all and others having their name changed.

In FMA03, Hohenheim is just a normal human being who was originally Dante's lover; however, he eventually left her due to no longer sharing her desire to have immortality at any cost. Like Dante, he created a Philosopher's Stone and gained a long life by transferring his consciousness into another person's body. His role in the anime is very minor, and he becomes trapped on the other side of the Gate after a confrontation with Dante that ended in failure.

In FMAB & FMAM, Hohenheim was a human Philosopher's Stone with a seemingly infinite supply of power. Although he was originally a slave, he was granted his near-immortality by Father well before the events of the series took place. Hohenheim is more significant in FMAB & FMAM, facing off against Father at the end of the series. Unlike FMA03's Hohenheim, he dies at the end of FMAB & FMAM after finally exhausting the power of his Philosopher's Stone.

The Gate is the largest major change in the series. In FMAB & FMAM, the Gate is the source of all alchemy and also seems to be a source of infinite knowledge. The Gate is also guarded by a being commonly referred to as Truth, and who is responsible for taking the required tolls from alchemists who perform human transmutation. Those who are capable of performing alchemy have their own gate, and if that gate should be removed (by sacrificing it to Truth), they will no longer be able to perform alchemy.

In FMA03, the Gate is still the source of alchemy, but it also serves as a portal between the world of Fullmetal Alchemist and Earth. Furthermore, the Gate derives its powers from the souls of those who have died on Earth and is what powers the transmutations performed by alchemists.

Brotherhood is actually more faithful to the Manga. The first 'version' follows the Manga to some extent (about half the show) although it adds some details that do not follow the Manga.

Most of these different aspects I really don't understand.

As for the number of episodes: the 'reboot' actually catches up to the first version rather fast (in about the first 4th) and then has 'new material' (comparing to the first one, but actually it is just going according to the manga) until the end of it. Brotherhood also has more episodes (64, compared to 51) .

Also, the animation in itself is rather different in Brotherhood (much better IMO).

Basically, the first series is, in my opinion, rather poor when compared to Brotherhood.

While they both start the same way, the first one starts to develop following a whole different path than the Manga. This is because when it was being aired, the Manga was not done yet, so the plot as well as the end of the anime are invented.

The second was done after the Manga ended, so it respects the original Manga much more. I watched both because I didn't know of this distinction. But I can tell you quite objectively, that even if the first one is not so faithful, it was of very good quality, speaking of plot twists, unexpected changes in history and other similar devices.

The new Fullmetal Alchemist series is completely worth it since it adapts the original manga from beginning to end. The previous series, while being really good (in my opinion), diverges from the manga in the whole second half and ends in a way that was not supposed to be. The new series follows everything, retells in just a few chapters what we previously watched and then tells a completely new story with a completely new end.

There are quite a few differences, actually. The "original", or the "first one" is an entirely different storyline from the manga. The manga was the original thing, so most people hate the first FMA series.

A few differences between the two anime series are:

Lust has a black dress in the first series, but in Brotherhood, she has a reddish-brown dress.

Gluttony, Envy, and King Bradley look the same. Sloth looks like Ed and Al's mother, while in Brotherhood, Sloth is a big (much bigger than Armstrong xD) buff male with long black hair.

In the first series, Greed looks normal, but 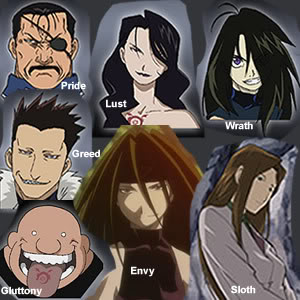 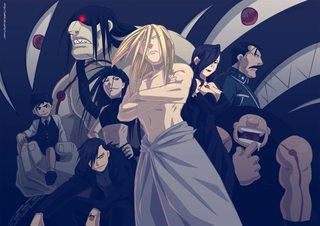 (The blonde guy in the middle is Father)

In the first series, Hohenheim has a more round, smooth face. His glasses are bigger and more round. His hair and beard is a dirty-ish blonde color, and his ponytail is lower. In Brotherhood, Hohenheim has a rectangle-shaped head. His face has more ...umm... say "chiseled" features. His glasses are smaller and not as round. His hair and beard are light blonde, and his ponytail is higher) 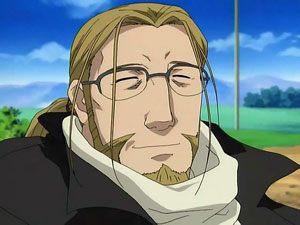 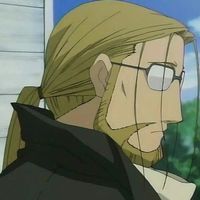 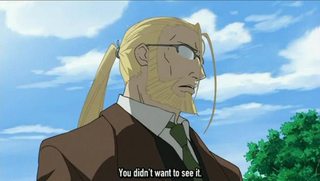 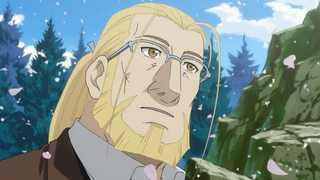 In the first series, Rose's skin is brown. Her hair is dark brown with pink bangs. In Brotherhood, Rose's skin is very white. She has black hair with maroon-ish colored bangs 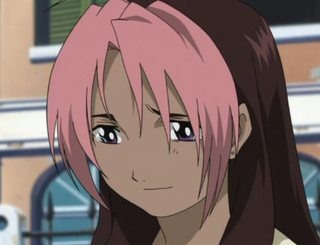 I had more in mind, but in the midst of typing, I forgot what the rest was. I apologize.

Even with the absence of the other differences I had planned to provide, I hope this helped.

10
What is the correct watching order of Fullmetal Alchemist?
7
How do the Homunculi differ between the FMA manga and anime?
10
At what point does the 2003 series and Manga/Brotherhood series start to diverge?
10
Was there any canonical or production-related reason for the fights in Dragon Ball Z being dragged out?