The name of the anime movie about apes [closed]

Ask Question
Asked 8 years, 3 months ago
Active 6 years ago
Viewed 586 times
5
votes
Closed. This question is off-topic. It is not currently accepting answers.

The apes cannot travel to the distant city at the other side of the lake/sea since their God will get angry if they get in the water. They'll find at the end that this is lie and they can go wherever they want to.

The civilized apes wear hats all the time, because they're not supposed to show their ears in public.

There are no humans in the anime, so the main character is an ape who fell by accident from the mountain, home of the uncivilized apes, to the city, home of civilized apes. This ape (I forgot his name) came out to be a very clever and intelligent. I don't remember what he did, but I think he started to learn and became a brilliant savant, but I am not sure.

I watched the movie 3 or 5 years ago on TV and I think it was new at the time, but again, I am not sure.

The "style" and the atmosphere of the movie resembles to that of Spirited Away of Miyazaki. Though, it's not a Miyazaki movie.

Anyone knows this great movie ?

I believe that the movie you are looking for is A Monkey's Tale. 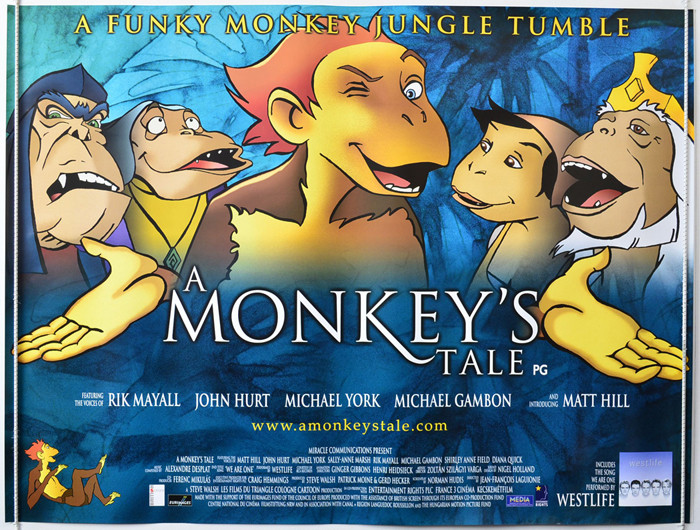 Kom is a member of the Woonkos, a tribe of monkeys who live in a canopy and they live in obsessive fear of falling into a nearby pit, which is inhabited by other monkeys they believe to be demons. Kom refuses to believe these superstitions and claims bravery and is rude to the elder of the Woonkos. However, on the way home, he accidentally falls from the trees into the land below. When there, he meets the Lankoo tribe and finds they are in fact very similar to his own tribe. He befriends Gina, a young maid and Master Martin, the librarian and they help teach him to behave like a Lankoo. The Lankoo king is impressed by his actions, although Gina doesn't like it when he tries too hard for popularity, and briefly forgets her. However, there is also evil afoot. The chancellor Sebastian, the governess and their dim-witted side-kick, Gerard the Gormless, are up to evil plans: they will find a way for the King to die and they are poisoning his already sick daughter, Princess Ida. The King, along with most of his army, die drowning while attempting to reach the "promised land" on the other side of the poisonous lake when it was frozen. Sebastian believes his plan has worked, but the governess (who was giving the princess the poison) is given it herself by Gina and the one remaining soldier, however it is believed she is tough enough not to die, but will remain a "sleeping ugly". The film ends with Sebastian and Gerard in cages, Princess Ida as the new queen and Kom and Gina returning to the land of the Woonkos, while it is clear that the two tribes will unite. It features the song "We Are One" by Westlife.

I think this is what u need as per the question.
The story is pretty much similar but this is not a movie, its a proper anime series.

Name : Saru Get You

When Specter gets a hold of a Pipo Helmet, he becomes intelligent and starts using monkeys to spread chaos around the world. Using their teleporter and gadgets, Kakeru, Hiroki, Natsumi and the Professor work to capture the monkeys and stop Specter's plans, later joined by virtual girl Charu and mech genius Haruka. It is revealed that Specter's true identity is Natsumi's pet monkey, Kuuta, who was transformed into Specter by a group called the Pipotrons. They host a game in virtual space, challenging Kakeru and his friends for Specter's freedom, but Specter escapes before they get there. The Pipotrons then challenge Kakeru and co to a tournament. Specter eventually learned about the kind things humans have done for monkeys, protects Kakeru and returns to being Kuuta

The only thing I could find remotely similar was called "monkey magic", but it's an anime series and I could only find episode clips to see what it was like. Watch out though, there is a live version of the show that is... well it's old and kinda weird.

Monkey Magic was an anime series that aired in the 1990s based on Journey to the West. To avoid religious implications, the Buddha was named "The Guardian". The show did not perform well and only one season of 13 episodes was made; the pilgrimage had only begun, with the dragon-horse joining the small group and the priest's two other disciples not appearing. Sunsoft produced a PlayStation video game based on the cartoon. Monkey Magic is an incarnation of the famous ancient Chinese novel, Journey to the West, in which it follows the novel's story to a high extent. It had aired in the USA first in 1998, while Japan got it at the end of 1999 of December 25.

A very wise but immature and foolish monkey named Kongo, magically blasted out to life from a stone. He was obsessed with learning and a needed to be great so Kongo leaves his "family" on Flower Fruit Mountain in search of ancient knowledge and arcane wisdom. Kong didn't want to just study and learn the mystical arts, but to master the magic Jet Cloud, the first of his great weapons. Kongo later gains mastery of the air and returns to his adopted home just in time. Humans are laying claim to the monkeys` ancestral home. With his Jet Cloud and his newly-learned magical wisdom, Kongo defeats the humans and proclaims himself King of Flower Fruit Mountain. But in the Celestial Heavens, the gods are uneasy. A monkey defeating humans and declaring himself king? That cannot be allowed! They decide the monkeys must be taught a lesson and so they launch an attack on Kongo and all the monkeys of Flower Fruit Mountain.