According to this, Archer's weapon is based from a real weapon.

Isn't it an example of bootstrap paradox? Where did he get the idea to use those weapons in the first place? Did the VN explain this?

The Archer-EMIYA summoned by Rin is different from Shirou coming from a different timeline where the results of the Holy Grail war were different; the visual novel notes 3 key differences between them:

Now, as for Kanshou and Bakuya, they do exist before Archer and Shirou, and their legend remained. However, what they look like was practically lost with the only known description being that Kanshou had a black tortoise shell pattern and Bakuya had a white wave pattern. Their actual shape was derived by Archer himself based on an assumption that they were cast swords common to the time period.

Now, the Projections Archer and Shirou use are inferior to the actual items. With weapons, they need to emulate the experience of that weapon's legends and its history. Shirou just copying "two swords that he admired from a guy he disliked" would make the swords weak, so given time he would probably research the swords and come to the same assumptions as what Archer did, and Archer would have researched the swords as a means to build up his arsenal in Unlimited Blade Works.

Since the true description on their appearance is somewhat lost, Kanshou and Bakuya would be the perfect test weapons on the concept of creating "existing weapons with a new form". This way, even though emulating the experience for the weapons would still make them weaker, being able to improve on them by changing their form and fixing their inherent weaknesses may help them become just as powerful as the originals. I can back this up as I've read somewhere that Archer has modified the design of Kanshou and Bakuya to suit his style so they are more customized.

Ultimately I think Memor-X has the right answer, but I think there are some other relevant details that are worth remembering.

The Throne of Heroes exists outside of time and space, and the "EMIYA" in the throne has access to all events he has experienced during his summonings in all timelines, worlds, and realities. But normally a summoned Servant has more restricted access, coming only with those memorizes that the hero has internalized (and the knowledge the nature of the summoning has granted him, such as the Greater Grail System in Fuyuki). The "memories" of all summonings contained in the throne are likened to books: they're not internal to his spirit, but can be accessed much like you can just take a book off of a shelf and read it to learn what's inside it.

Now, there's something very special about Archer that interacts differently from all of this: he has a Reality Marble. These exist essentially outside the Throne, and is attached to the heroic spirit as he exists within the Throne. All summoned versions of him access this exact same reality marble. And his reality marble stores all weapons (and potentially other things, like Rho Aias) he encounters. So in order for FSN Archer to be able to project Kanshou and Byakuya (or Rho Aias, etc.) he needs only for some version of himself in some world's timeline to encounter it, and now they all have access to it, regardless of apparent chronology.

In reality things happen more like Memor-X says: rather than witnessing K&B in some fight, Archer is specifically said to have learned of these weapons which were said to be of Noble Phantasm quality but yet no hero was associated with them. These "fit" him better, as the best projections require you to project the skills and abilities of their wielders. The lack of such made K&B easier and simpler to create, as well as sort of fit the theme that EMIYA was "nobody", making them feel more natural and like they were "his".

As an aside, this reality marble is also essential to EMIYA's perspective and spirit warping, leading him to come up with the idea to try to kill (an earlier version of) himself in order to end his own existence. A Reality Marble is the user's inner world made manifest, and the experiences of his summonings impacted his reality marble and effectively carried on their memories to all versions, including the "true" version enshrined in the throne. You can see this by noting how there are significant differences between Shirou's and Archer's uses of Unlimited Blade Works. Archer's looks more apocalyptic and miserable, with a cloudy, ashen sky and large gears. Shirou's tends to have a more hopeful, brighter, bluer sky and far fewer (to no) gears. 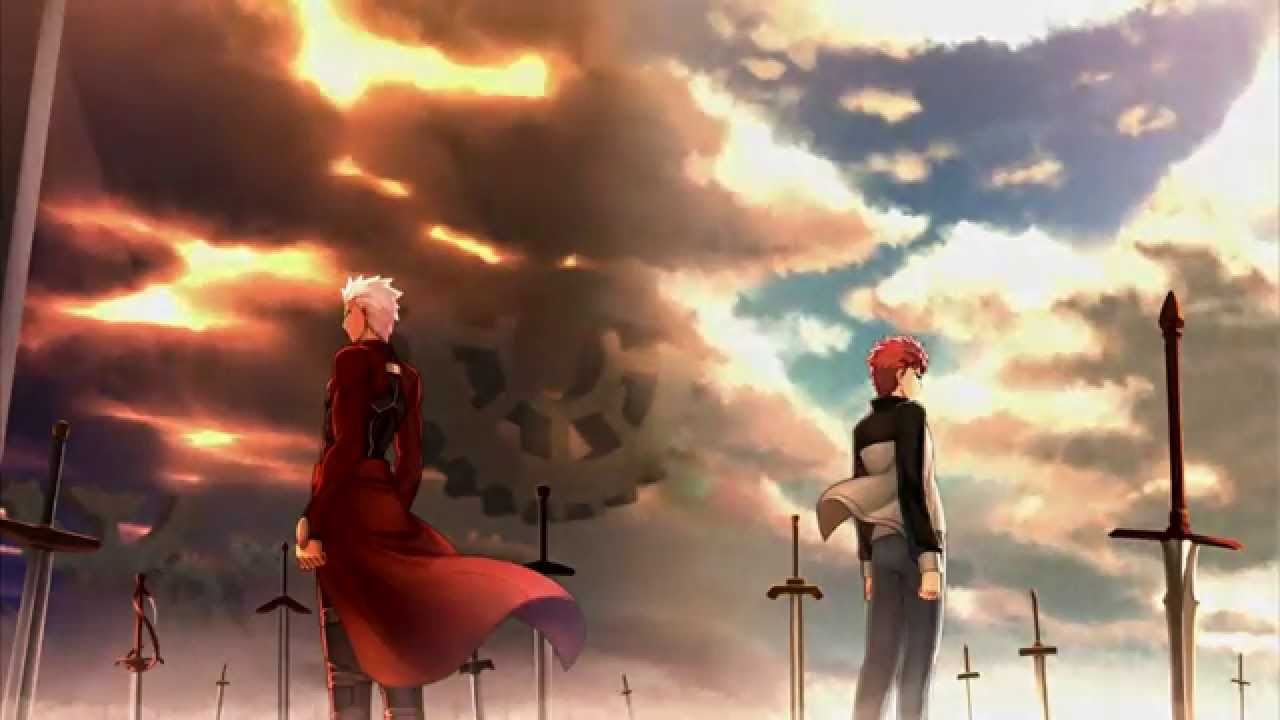 9
What are Archer's twin swords based off of?

9
What are Archer's twin swords based off of?
7
Are all of the Holy Grail War servants based on real heroes?
9
Is it possible for one Master to have multiple Servants?
9
Do people die if they are killed?
2
Are Servants also given knowledge of future heroes?
6
What do servants expect will happen at the end of the Holy Grail war?
4
Why did the Einzberns make Illya a master?
6
What is Archer's background in Unlimited Blade Works?
7
Are these two people with the same given name the same person?
5
Did anyone find and remove Kiritsugu's explosives?