Is there a reason why Nezuko is the only one in his family that turned into demon?

We all know that Nezuko has a strength that is in par with the Twelve Demon Moons, So I'm assuming that shes the only one from her family the has been successfully turned into the demon without dying even after Kibutsuji injected a large amount of his blood?

So far in the series, it's not explained why Nezuko is the only one that was turned into a demon, but chapter 196 of the manga does give some insight into what happened when Kibutsuji attacked the Kamado family. 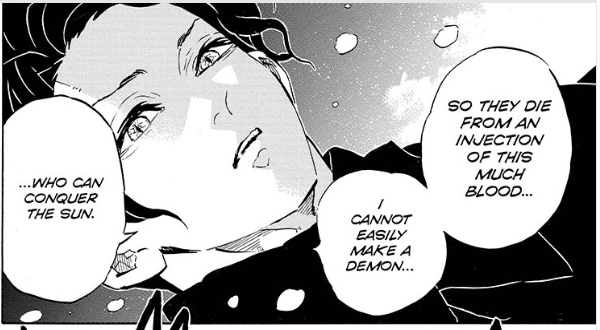 So from this you can determine that:

Kibutsuji doesn't necessarily pick Nezuko to turn into a demon. He was trying to make a demon that could conquer the sun and appears to try with every member of the family. All family members were assumed dead, Kibutsuji comments on it not being easy, and only later does Tanjiro show up to save Nezuko and find out she's a demon. In other situations, like when Kibutsuji turns the man into a demon when he first meets Tanjiro, the process happens immediately. The best information as currently available in the manga points to Kibutsuji trying with the entire family, assuming he failed, and moving on only to later find that Nezuko was "alive."

Will update if new information becomes available in later chapters.

Not the answer you're looking for? Browse other questions tagged kimetsu-no-yaiba or ask your own question.

10
In Yaiba, why does Nezuko still have a “muzzle”?
1
What did Nezuko to help Tanjiro in his battle against the older brother spider?
5
Why does Tanjiro's Nichirin Blade is Black?
1
Why is Nezuko stronger than regular demons?
10
In Kimetsu no Yaiba (Demon Slayer) how does Nezuko get sustenance?
5
Is there a reason for not training Nezuko in breathing?
1
Which chapter of the manga does Season 1 of Kimetsu no Yaiba anime end in?
2
Why does Muzan Kibutsuji Crossdress?
1
Is Tanjiro using the fire god's breath dance and Nezuko using his ability a deus ex machine? Does it have foreshadow?