Is the term 4koma a generic term?

I know the term 4koma only from the .hack series, in which it normally relates to the parody manga .hack//4koma, and it's also the title of the bonus videos unlocked in .hack//G.U. on the desktop.

However, I have seen the term 4koma used in other places, so I am wondering if the term 4koma is a generic term used to describe something, and if so, what it actually means.

4koma (pronounced yonkoma) is a Japanese word meaning "4-panel"1, and refers to a type of manga which is formatted as a series of four vertically-stacked panels. This term is used in contrast with "regular" (non-4koma) manga, which do not typically adhere to a rigid panel structure.2

Here is an example from one very long-running (and famous in Japan) 4koma manga, Sazae-san:3 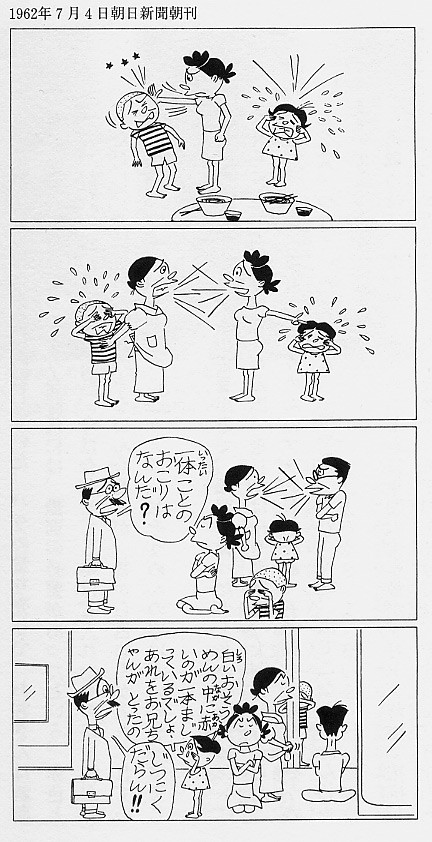 Some of the most famous 4koma manga among Western audiences are Azumanga Daioh, Lucky Star, Hetalia, and K-ON. As this list suggests, the 4koma format is heavily populated by gag comedy manga.

2 Think of 4koma as being sort of like your bog-standard weekday newspaper cartoons (at least in the US) in that sense - 3 or 4 panels, and no real freedom as to how to use the space available.

3 Note that most 4koma these days have narrower panels (usually square), allowing two 4koma to be printed side-by-side on paper with a standard A or B aspect ratio

5
Why do characters in K-ON refer to each other by given names?

22
Why are romantic events sometimes called "flags"?
21
Is the term Otaku derogatory?
53
Where does the term "waifu" come from?
1
Where does the term "3D girl" come from?
4
Is The Legend of Korra anime?
8
English-English term for "Shōjo manga"
6
On the origins of the term "forced drama" as it is used in discourse about anime
2
What's the term for the bullied kid who delivers bread and sandwiches to the bullies?
17
When did otaku become a derogatory term?
1
What is the Japanese term for an old man/grandpa who is into anime/is otaku?