Why is Midoriya from My Hero Academia compared with Naruto and called "green Naruto"?

This has to do with the concept of the Big 3. For a little bit of background on what the concept of the big 3 is you can take a look at What phenomenon are at play such that the "Big Four" are limited to four and not a growing list?.

With the ending of Naruto in sight at the time, and the great reception of Boku no Hero Academia (BNHA) at the same time, it became a sort of hand-off. People watching Naruto needed something new, and BNHA offered something similar but with a fresh twist, while it still kept true to the 'shonen' tropes everyone got so used to throughout the big 3 (and Dragon Ball).

This is similar to how the fandom created the picture of Goku handing over his 'success' to the logical new big 3 at the time. The fandom also created the hand-off from Naruto to BNHA, due to the exit of Naruto, and successful entry of BNHA.

As Midoriya thus is replacing Naruto in the mix of the big 3, he is often regarded as the green Naruto. 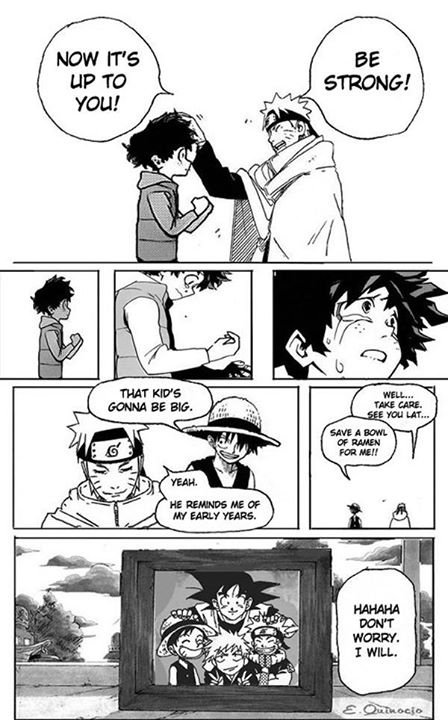 I think this also has to be mentioned, about "My Hero Academia"'s author.

Horikoshi's favorite manga series include Naruto, One Piece, Akira, Tekkonkinkreet, and Boys on the Run. In a farewell bid upon the conclusion of the former, Horikoshi referred to it as the greatest shonen manga ever, as Naruto made up his childhood and was one of the primary inspirations behind My Hero Academia

Not the answer you're looking for? Browse other questions tagged naruto my-hero-academia or ask your own question.

10
What phenomenon are at play such that the "Big Four" are limited to four and not a growing list?

2
Why Katsuki Bakugo was so mean with Midoriya when he didnt have any quirk?
4
Why is Midoriya's power so low according to the official character book?
7
Why has no one except Bakugo figured out that All Might passed his powers to Deku?
5
Why do the top 10 heroes in Boku no Hero Academia only come from Japan?
1
Why was season 4 episode 4 of My Hero Academia delayed?
0
What is the difference in height between Midoriya and Mirio Togata?