Why did the Survey Corps search along the wall instead of on top of the wall to find a hole in the wall?

You know that part after the female titan part where suddenly Titans were spotted, Mike died and the survey corps horse rid along the wall to find a hole (which wasn‘t there but they couldn‘t have known)? They themselves knew that it was very dangerous because of course they suspected that there were lots of titans coming through the hole and if they found the hole they needed to flee or fight.

But why didn‘t they just run on top of the wall to find the hole? Of course they can‘t see it but they could see the titans and where they are heading to (to the hole) and they could see the titans going though the hole without risking their lives. I know that Ymir and Historia etc. didn‘t have their gear but Nanaba for example did and she could have helped them get on top of the wall. They even expected there to be lots of titans and the wall is 50 meters high they could see very far. I think it‘s an easier and safer solution. 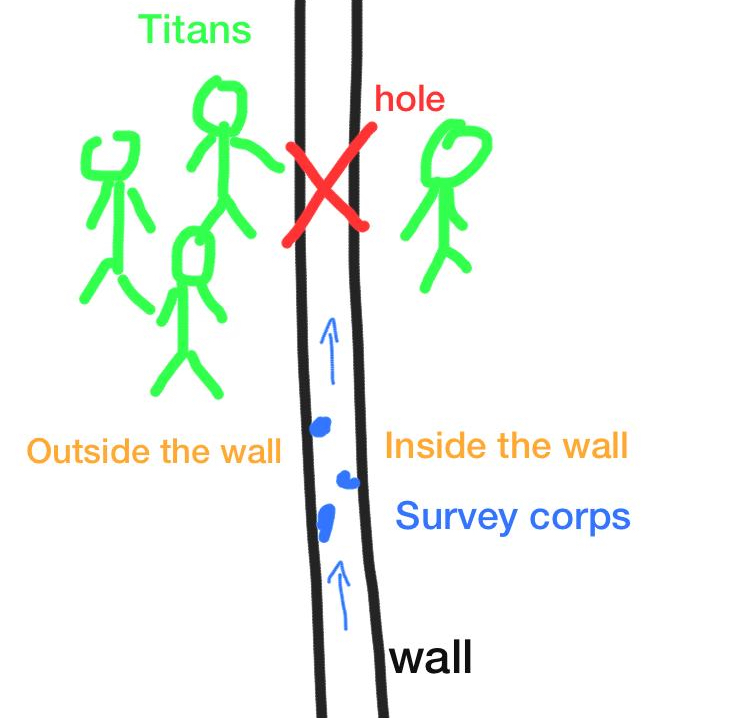 Well, it is true that you could spot a titan from the wall but, don't forget the time of day it was. Night, it was pitch black at that time. You might be able to see a 15m titan but a 3-4 meter is questionable. Yes it would have been safer to use the wall but at the cost of visibility. I don't know exactly but most of the titans that we have seen arent 15m tall. So they chose to go on the ground to maximize visibility.

11
Why didn't the Titans wipe out humanity yet?
0
How was wall Rose breached in season 2 of Attack on Titan?
7
Why didn't the Survey Corps just use the top of the Walls as a way to get to Shiganshina?
6
Could titans suffocate?
1
Why isn't the Beast Titan at the start of season 3?
5
What happened to the Titans after the Survey Corps left the walls?
0
How did the Scouts know that Mike Zacharias died?
3
Why did Marley send titans to Paradis Island in the first place?
2
How did Reiner escape the ODM inspection?