What are the sins of the 7 deadly sins members?

I just saw this question from (1) of a posts here and I am curious for what really is their sins.

I remember Ban saying "The real sin is something you cannot atone" and it looks like he really have done something so grave for him to say that.

What are their sins and among them who has the gravest sin?

Originally, when the individual sins were recruited to the team they were absolved of a crime in the Kingdom of Liones whose sentence was death. Most of these crimes are somewhat bogus but the characters feel responsible regardless.

Meliodas, the Dragon's sin of wrath:

Annihilation of the Kingdom of Danafor

Brought up by Dreyfus in Ch 29 and fully realized in a flashback in the cave of druids in Ch 130-1. Meliodas had met and fallen in love with Liz, a holy knight of the kingdom of Danafor which was a kingdom that rivaled the might of Liones until it suddenly ceased to exist. This fateful day 15 years before the story is caused when Liz is killed by one of the 10 commandments, Fraudrin of selflessness. In his grief Meliodas' demonic powers manifest and when he next comes to Danafor is nothing but a crater. 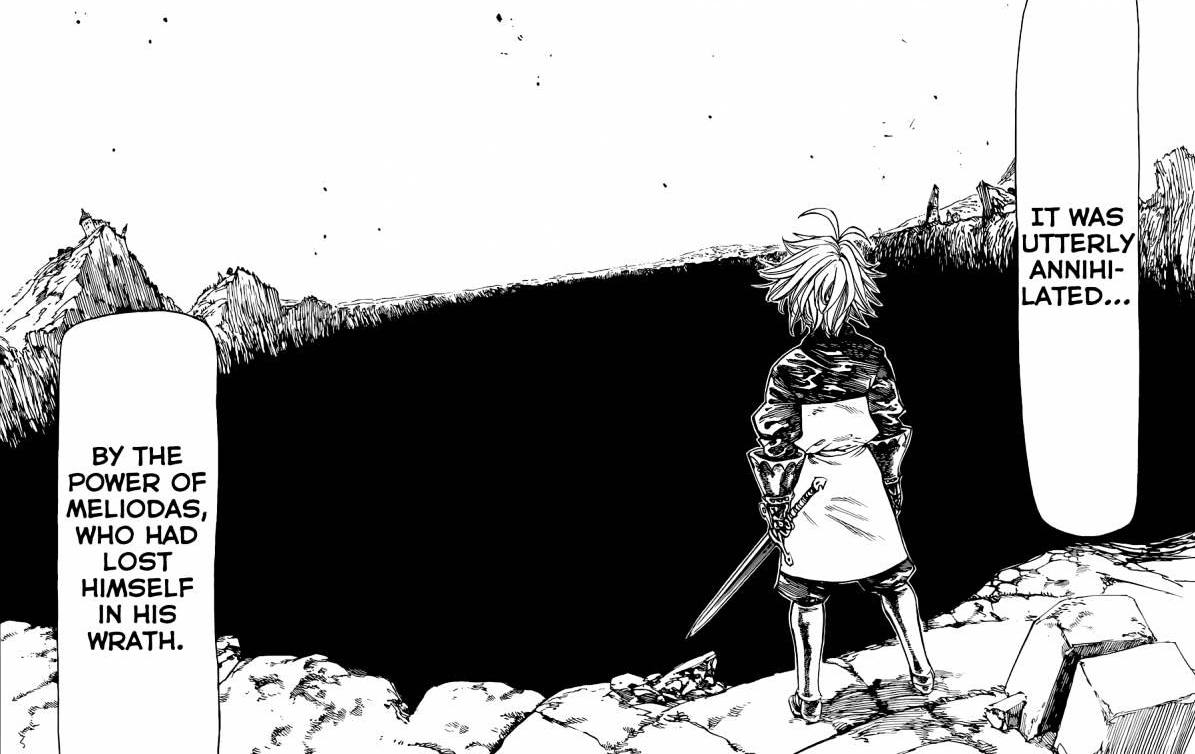 Ban, the Fox's sin of greed:

Destruction of the Fairy King's forest, drinking the fountain of youth and killing its guardian

Covered in side story 1, 20 years prior to the story a fully human 23 year old Ban makes his way to the Fairy King's forest seeking the fountain of youth according to the stories told to him by his father figure, the werefox Zhivago. Ban doesn't really care about the fountain that much but feels the immortality it provides might give him enough time to find something worth living for. He gives up on drinking it when Elaine tells him the forest will die if he does. Ban and Elaine grow closer during this time as Ban finds someone who doesn't instantly hate him and Elaine finds someone whose company she enjoys. The two are making plans to elope when a giant demon attacks the Fairy King's forest and mortally injures both of them. Ban urges Elaine to save herself with the fountain of youth but Elaine instead gives it to Ban mouth to mouth who obliterates the demon before saying goodbye to the first thing that made his life not suck. 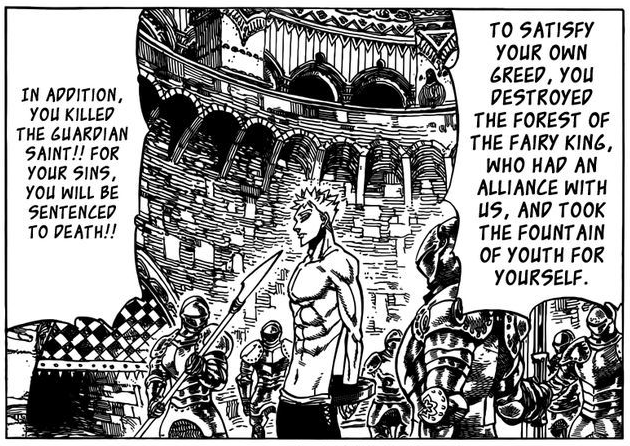 Allowing the murder of countless innocent humans despite interracial treaty

Covered in side story 2, long ago humanity made a peace treaty with the fairies of the fairy king's forest. 700 years ago King's best friend, Hellbram among others were captured by humans who sought fairy wings to make medicine that supposedly extends human lives. King abandons his duties as protector of the forest of the fairy king to rescue his friend but gets surprised with a hard knock to the head by the leader of the fake merchants and loses his memories. Diane finds him passed out on a riverbank and the two become friends for 500 years until one fateful night when they see flames coming from the human town near them. Harlequin goes into town alone to witness the aftermath of a massacre in which all the humans were killed via slashes to the back reminiscent of a fairy with its wings pulled out. King confronts the perpetrator of the massacre who is the same false merchant who knocked him out centuries prior, his memories returning King realizes the merchant is now actually his friend Hellbram (who killed the false merchant) in disguise. Having been broken by watching humans whom he previously idolized kill his friends for profit Hellbram has been waging a one-man genocidal campaign against humanity for 500 years while King has been amnesiac. King reluctantly puts his friend down and wipes Diane's memory before turning himself in for Hellbram's crimes, feeling despair for having not realized the ordeals his friend had gone through while he was gone. 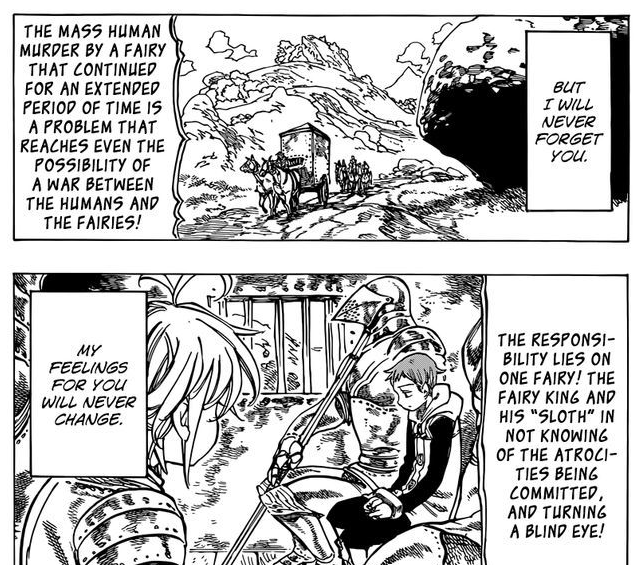 Diane, the Serpent's sin of envy:

Murder of Matrona, ally of Liones and 330 holy knights

As explored in side story 3, in the years prior to joining the sins Diane was being trained to become a warrior chief by her mentor Matrona, chief of a tribe of giants whom often served as mercenaries for the Kingdom of Liones. At one point the pair were hired by a large group of holy knights of Liones in order to defeat savages but were betrayed when Gannon, leader of the holy knights admits there are no savages and his true goal was to slay them for fame and glory. Diane, a staunch pacifist refuses to fight and Matrona gets shot by a poisonous bolt intended for Diane. As she lies dying in Diane's arms Matrona chides Diane to be stronger before impaling most of the holy knights trying to kill them with earthen spikes. Matrona is pronounced dead and the surviving holy knights twist the facts to state Diane poisoned her mentor out of jealousy before killing 330 of the knights to cover up the crime. 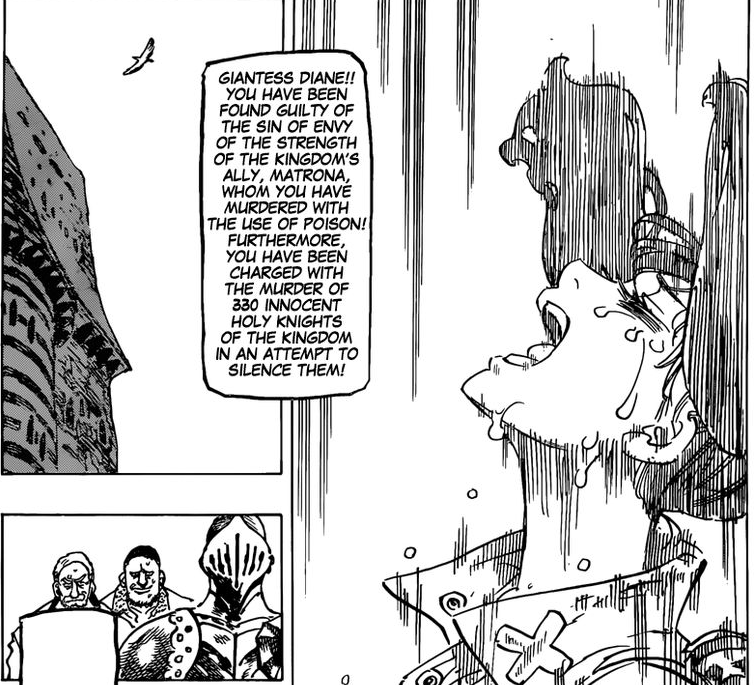 Gowther, the Goat's sin of lust:

Attempted rape and Murder of Nadja, Crown Princess of Liones

Explored in side story 4, Gowther (the enchanted doll) awakens beneath the royal castle of Liones having been dormant for the 3000 years since his creator's last great feat of magic and death. He is found by Nadja, princess of Liones, sister of the current king Bartra who was wandering around the cellar in secret since she has never been allowed outside due to her weak constitution. She faints when Gowther, trying to explain he is a doll tears his chest and shows her the artificial heart given to him by his creator, Gowther (the demon). Bartra brings Gowther into the castle as a maid so Nadja won't have to keep visiting the cellar and Gowther isn't left alone where they enact many of the events in Nadja's swashbuckling adventure story. Nadja's constitution continues to deteriorate but she assures Gowther that his existence as a doll doesn't mean he has any less of a heart than she does. She eventually passes away peacefully, content with her life and Gowther unable to accept it or understand better attempts to put his artificial heart into her chest to resurrect her. The commotion brings the guards to her room where they bear witness to the grisly scene and sentence him to death 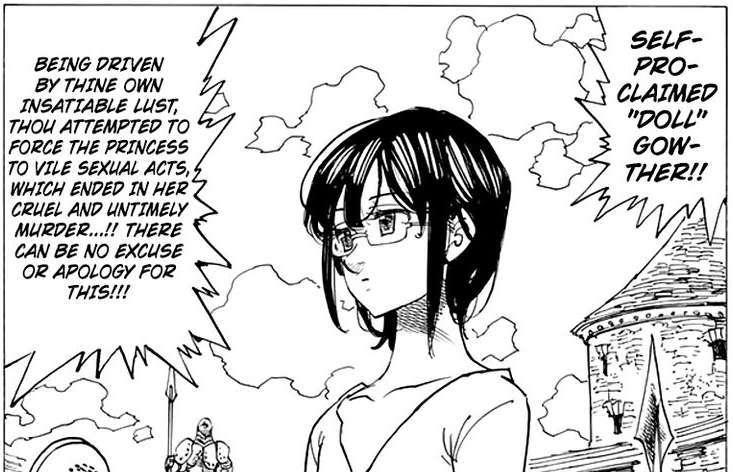 Escanor, the Lion's sin of pride:

Escanor's past is detailed in side story 5 as well as Ch 169. Escanor was born the second son of the King of Castellio, he grew up bullied by his elder brother Draymond for his cowardly nature until one day when he awakened Sunlight and broke his brother's arm. Terrified of the monstrous form bestowed upon him by the former magic of an Archangel, the kingdom decides to have the child killed. A woman named Rosa helps him escape by boat at which point he is left to fend for himself in Liones. He is treated as a freak to be hunted down in Liones as well until Merlin and Meliodas track him down to make him the final and youngest member of the sins. He tries to run away from the group just before dawn fearing his Sunlight empowered self will get them all killed but is stopped by Merlin who finds his constitution interesting. Meliodas taunts him as dawn breaks and gets punched into Ban causing Escanor to flee thinking he killed them. He destroys a mountain hoping to overuse his powers and kill himself as he never wanted his power which always pushes people away from him. Meliodas comes back around and challenges him to a brawl at noon in which he uses assault mode and has Escanor at his mercy in one hit. Meliodas tells him that he may hate himself but the life he lives was gifted to him and can be taken just as easily if he doesn't want it, Escanor chooses bear with the self loathing and live life to its fullest. 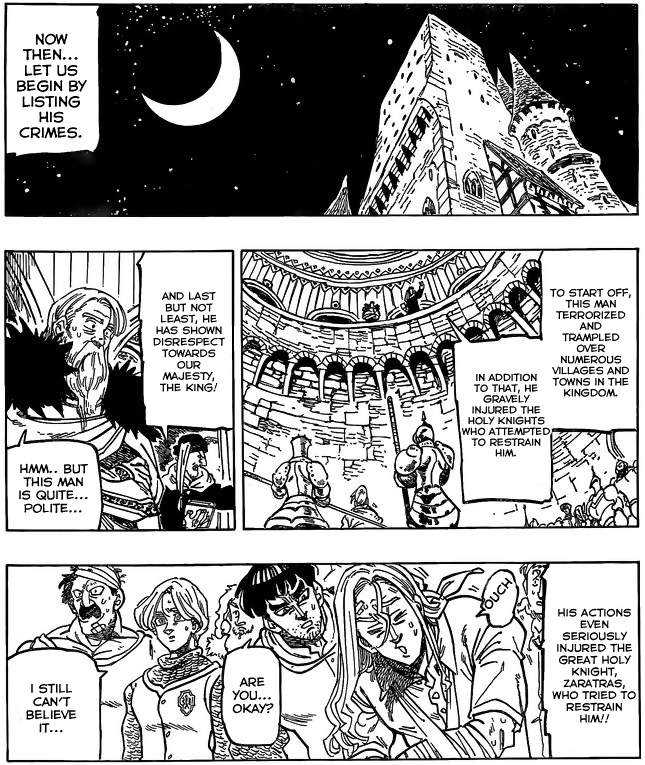 Merlin, the Boar's sin of gluttony:

Whatever her crime was has yet to be revealed although she may not even have one. Note that there are currently only 5 side story chapters detailing the crimes of the sins and if there is another it would probably be Merlin's. In Ch 182 King Bartra of Liones whose prophetic powers have shown him the sins will be the guardians of Liones meets Merlin for the first time who has already selected a band of seven for the task including herself and the new holy knight of Liones, Meliodas. Perhaps he has simply never heard of her trial but it somewhat seems she signs on just to help fulfill the prophecy. 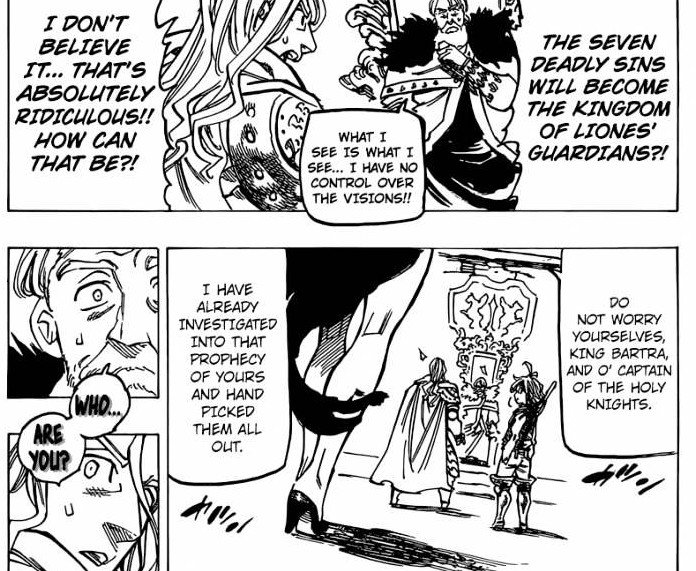 Having gone through their crimes it can be noted most of the sins have been absolved of crimes based on bogus pretenses except for Meliodas, Escanor and possibly Merlin of the two we know about Escanor was mostly acting in self defense. Meliodas obliterating a kingdom while not conscious was a pretty grave crime.