Why wasn't Jiraiya burried in the Konoha Cemetery?

In Boruto episode 136, I noticed that Jiraiya's tomb is in the woods and not in Konoha Cemetery. Jiraiya is a leaf ninja so I assume his remains should be in Konoha cemetery and in fact he died because he was trying to save the village. The place doesn't also resemble Mount Myōboku. 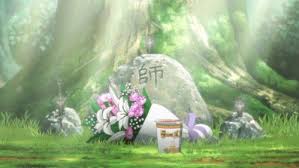 As JNat stated in the comments, this is a memorial for Jiraiya rather than an actual grave. Jiraiya's body was unrecoverable at the bottom of the sea, so there was no body to bury in the cemetery.

But given Jiraiya's importance and status, why wasn't he given a proper funeral? Well, Naruto built this memorial outside the village shortly after Pain's Assault. This is likely due to the fact that during Pain's Assault, Konoha had just been destroyed and time to hold a funeral was not a luxury they had.

Jiraiya's body was killed in the water, he was thrown into the water at the time of his death, and the sight was too deep to find his body. It was Naruto who made him a statue in the woods just outside the Leaf Village

15
Why wasn't Jiraiya brought back with Edo Tensei?