Why couldn't Alphonse Elric fix his own armor?

why did he have to rely on Ed to mend his armor? Did they not have the same abilities more or less? 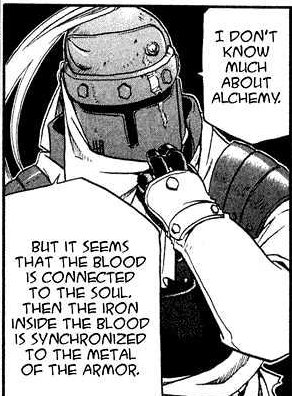 Basically, the blood of the rune links to the soul and the iron in the blood anchors the soul to the armour. Since the armour is made of iron it stands to reason arbitrarily fixing the armour with alchemy is dangerous as it might harm the blood rune and cause Al to unbind from the armour. We see with the death's of Slicer in Ch. 13 and No. 66 "Barry the Chopper" in Ch. 39 (depicted below) that the rune is incredibly fragile 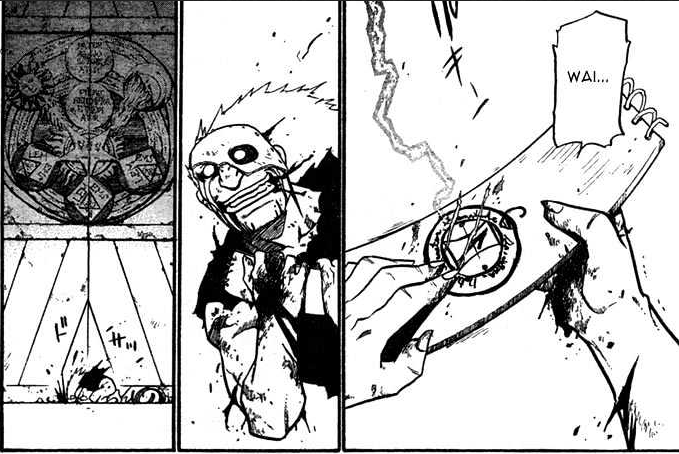 Just a scratch in the rune was all that was needed to kill Barry so it's not hard to imagine the consequences of accidentally warping the rune when transmuting. Theoretically Al can draw himself a transmutation circle when an arm comes off after the battle with Lust but likely did not want to risk it. In Ch. 7 after the brothers' first encounter with Scar in which Ed's arm gets destroyed and Al loses an arm + a leg Ed says he's the only one capable of handling repairs to the armour 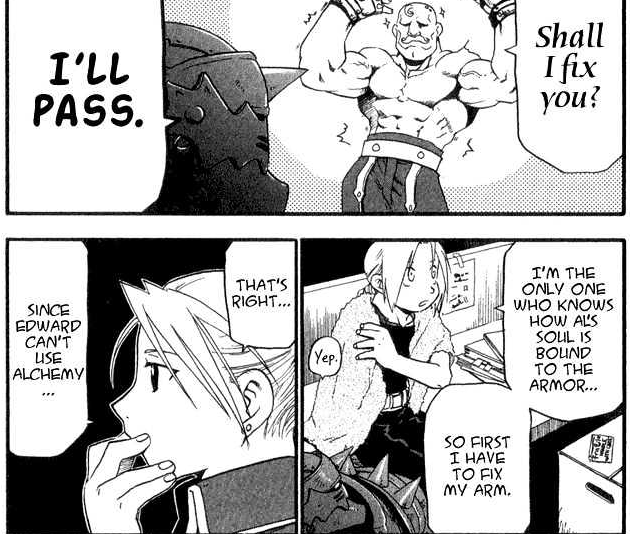 In terms of if the brothers alchemical abilities are the same, the answer is: not to begin with. At the start of the series Al doesn't remember seeing "Truth" which is the requirement to be able to transmute without a transmutation circle by clapping your hands together. Until he does, Al still has to draw transmutation circles to use alchemy. He only regains his memories of the "Truth" when Martel's blood splashes onto the blood rune during the Furher's raid on Greed's hideout in Ch. 30. The reason this restores his memories is unclear, whether this "completes" the rune or it just shocks the memories back is never elaborated on. Even after Al regains his memories of the "Truth" though he still relies on Edward to fix the armour as it's safest to let the person who crafted the rune to handle the armour. Especially when the rest of the armour needs to be thinned to compensate for the bits that are completely gone.

It may be metal but it was his own body connected to soul. To repair it something of equal value must have required for him to repair it like another persons body. But for edward and others its just piece of metal so he can repair it easily.

Not the answer you're looking for? Browse other questions tagged fullmetal-alchemist-brotherhood or ask your own question.

5
Why does Trisha Elric have tomatoes?
17
How did Alphonse recover his pre-gate memories?
8
Why did the Elric brothers burn down their house?
8
Why did Alphonse lose everything?
11
Why didn't Edward Elric get his leg back?
2
Why can't Alphonse trade his alchemy for Edward's alchemy?
6
Why is Ed able to exchange his knowledge?
6
Why did King Bradley allow the Elric brothers, Hughes, and Armstrong to continue investigating the military?
1
Why does Edward Elric throw up after digging up his mother's corpse?