In Overlord, what is Aura holding during the battle between Ainz and Shaltear?

In the battle between Ainz and Shaltear, Aura and Mare are up on a hill watching. Aura is carrying a large cylinder package on her back. What is it and what's it for? 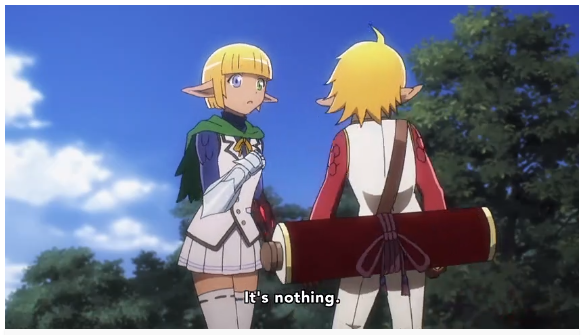 It's a world item called Depiction of Nature and Society. As stated in the wiki,

It resembles the shape of a giant-red oriental scroll that hangs from the user's waist....Depiction of Nature and Society allows the user to isolate space. Apparently, it can even swallow the whole space of the opponent. It was an item that could seal a target into a closed-off space. To be more precise, it swapped a painted landscape with the real world, and then it would convert the real world into a painted landscape.

If I recall correctly, Ainz ordered both Aura and Mare to scout the surrounding areas so this item together with Avarice and Generosity are merely countermeasures in case someone else tries to intervene between Shaltear's and Ainz's fight.

12
Why are characters named Momonga named after flying squirrels?
8
Why did Ainz tell Aura not to set her alarm on her watch at 19:19 and 7:21?
4
In the Overlord LN, how did Shelltear get mind controlled? And by whom?
4
Are Ainz and his servants still leveling in the New World?
4
Differences between the Overlord light novel and manga
5
How much does Shalltear love Ainz? (All quotes from the source material)
8
What was the meaning of the scene of Albedo at the end of Overlord season 2 episode 10
2
How was Ainz able to perceive the threat of skeletal dragon beforehand and warn Nabe?
1
In Overlord, if Ainz obtained the guild weapon of the 8 Greed Kings, would he be able to control the NPC's?