Why does Mewtwo look so different from Mew?

Mewtwo is a man-made Pokémon, created from the DNA of Mew. All the other cloned Pokémon in the movie Mewtwo Strikes Back look like the one they cloned from, but not Mewtwo. Mewtwo looks totally different from Mew. Why is this?

I believe this is a plothole, stemming from the discrepancies between Mewtwo's origins in the games, and its origin in the anime.

In the games, Mewtwo is not a clone of Mew, but actually its child: the journals in Cinnabar Mansion refer to Mew giving birth to it. Mewtwo was then subjected to "years of horrific gene splicing and DNA engineering experiments", which explains why it only vaguely resembles Mew - its DNA is no longer solely that of Mew.

In the anime, however, Mewtwo was cloned using Mew's DNA, and there is no mention anywhere of it being subjected to any further experiments, only of it "maturing" into its present form. Prior to maturing, it resembled Mew more closely: 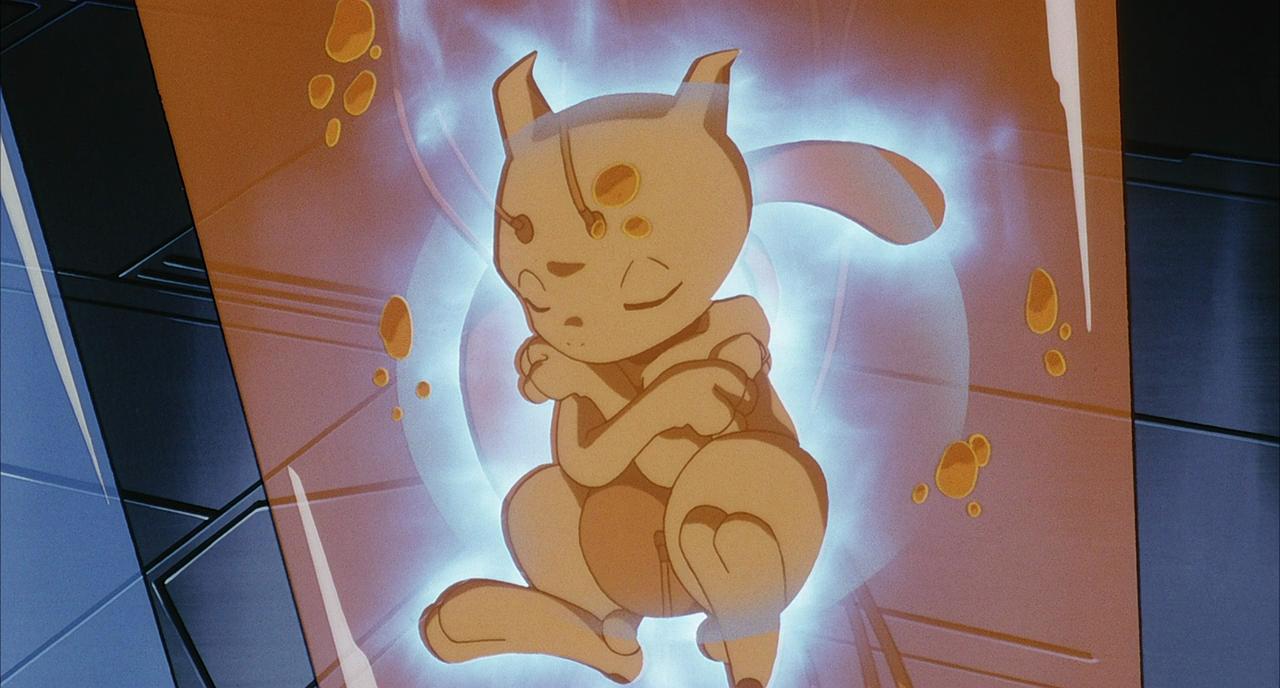 It's still possible that Mewtwo was experimented upon in a similar manner to the games, but in the absence of any evidence, I have to chalk this up to a simple plothole: there is no clear explanation for why Mewtwo should differ so drastically from the Pokémon it was cloned from, when the other clones exhibit no differences besides dark splotches.

In the Pokémon Adventures manga, Mewtwo was given human DNA as well as Mew DNA so Mewtwo should look different then Mew. More human. I don't see why this couldn't also have been the case in the anime and games. However, the Pokemon that Mewtwo cloned were given hardly any changes but the change of that they would obey Mewtwo. They were not injected with human DNA but with Pokemon DNA.

In the first movie, Dr. Fuji, the head scientist who worked on Mewtwo's creation in the anime, has this conversation with Mewtwo:

Dr. Fuji: "For years we struggled to successfully clone a Pokémon to prove our theories, but you're the first specimen to survive. That is Mew, the rarest of all Pokémon. From its DNA we created you, Mewtwo."

Mewtwo: "Mewtwo? Am I only a copy? Nothing but Mew's shadow?"

Dr. Fuji: "You are greater than Mew, improved through the power of human ingenuity. We used the most advanced techniques to develop your awesome psychic powers."

Then later in the movie, when Jessie, James, and Meowth are sneaking around in Mewtwo's cloning lab, they find a recording which Dr. Fuji made about Mewtwo's creation in which he says this:

There was sufficient genetic material [in the fossil his team had found] to replicate Mew. But [emphasis mine] Giovanni, who financed our experiments, insisted we try to create super-clones, more powerful than any living Pokémon.

All that, to me, implies strongly that Mewtwo was not just cloned directly from Mew, but also subjected to heavy genetic modification to enhance his psychic powers. The other clones did not go through this process, and so they resemble the Pokémon they were cloned from.

This would also seem to fit in with Mewtwo's general backstory in other versions of the Pokémon world. In the Pokémon Adventures manga, it's explicitly stated that Mewtwo was created by blending human DNA with the DNA from Mew, and in the games, Mewtwo's original Pokédex entry states that

It was created by a scientist after years of horrific gene splicing and DNA engineering experiments.

I don't see why anime-verse Mewtwo would be any different, and there's nothing in the movie that suggests he is.

10
Are there any relations between the different "sagas" in Pokémon Special/Pokémon Adventures manga?
44
Is Ditto a Failed Mew Clone?
19
Who came first? Pokemon or Digimon?
12
Can Poké Balls technically catch humans?
5
When do the Pokemon Movies occur chronologically to the plot?
6
Is Pokemon Sun and Moon's story new or a continuation?
5
Is the Mewtwo in Detective Pikachu a Mewtwo we know?