Did Luffy travel the same path that Roger took to get into Raftel?

I've been quite curious as to why some of the islands that Roger has travled into are also voyaged by the Straw Hat Pirates such as Skypiea, Mermaid Island, and Zou.

If I recall correctly, there are routes in Grand Line on which you can set sail by traveling on the path indicated by the log pose( A device that tells you the direction of next island from the current island).

SPOILER ALERT: Don't read if you aren't up to speed with current episodes.

I can think of two reasons.But before that i would like to mention few points:

Also, Before I compare their journeys for you. Understand this:

Record of the Void Century 800 years ago, in the Wano Country, a clan of master stonemasons known as the Kozuki Family invented indestructible block shaped steles for the purpose of recording important history on them while preventing it from being destroyed. Those steles would become the Poneglyphs.

1. Joyboy: The mystery man we don't know much about. Who is the origin for most of the mysteries in one piece. Was the one who created path to one piece with help of wano kuri.And apparently Roger admires him, possibly so does luffy.
2.Roger: Who traveled most of his life(13 yrs +1 year apparently before his death) connecting pieces left by Joyboy. Known as pirate king (also thought to be his highest achievement). His, highest achievement is refining the path of grandline and making sure the man of prophecy reaches Laugh tale. 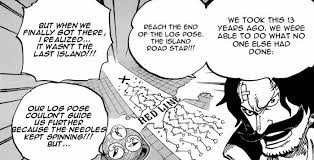 3. Straw hat Monkey D Luffy: The main protagonist of the story that has been changing the world since arc I. And probably will change the fate of the world when he finds one piece.

Now, with considering all the data from above and concluding , Your answer:

Yes luffy and roger are travelling the same paths. And its because of one of the 2 reasons.

Edit: All in all, it was Rogers role to make it happen.

Simple answer is no, he is isn't travelling the exact same path as Luffy.

We do know that Gol D. Roger travelled the world for ~14 years after he reached the 2nd to last island, Lodestar (end of the Grand Line). We also know that he was ~39 years old when he reached Lodestar Island.

That means he most probably been to every single island in the world over his ~35 years as a pirate, assuming he became one at approximately the same age as Luffy.

We don't know how long it took Gol D. Roger to get to Lodestar island. The year he did reach it (39 years ago), is the year Shanks was born.

After that it took him 13 years to finally find someone from Wano, Oden (26 years ago). So for 13 years he was just searching for someone who can:

After Oden joined Roger Pirates it took them less than a year to travel to:

Before reaching Laugh Tale, Roger did not know about:

After reaching Laugh Tale, Roger disbands his pirate crew and spends the last year of his life with Portgas D. Rouge.

So Luffy is not travelling the same exact path as Roger. But Roger had 13 year of exploring the new world and visited most islands, possibly even all the islands in the world.

Sailed again with Oden to provide a path to the man of prophecy (yours luffy) So, that he wouldn't have to invest as much time and effort as roger did.

Roger couldn't possibly know about Luffy (or any other Joyboy) before Laugh Tale.

12
Why did Luffy ring the bell 16 times?
0
How did Flamingo get the Mera Mera no mi?
6
Has there been a woman that Sanji did not get attracted to?
2
How does navigation work in One Piece universe?
5
In which episode did Luffy say the following quote?
0
How did Jora get inside of the birdcage?
10
What are the similarities between Gol D. Roger and Monkey D. Luffy? Are they related by blood? What are their relatives' ages?
5
How did Luffy get the scar on his chest?
4
When and How did Luffy get the Scar under his eye?