Why did Madara have Rinnegan before activating it and nobody noticed?

While I was watching Episode 322 of Naruto Shippuden, I found what I guess is a mistake:

First look at the picture: 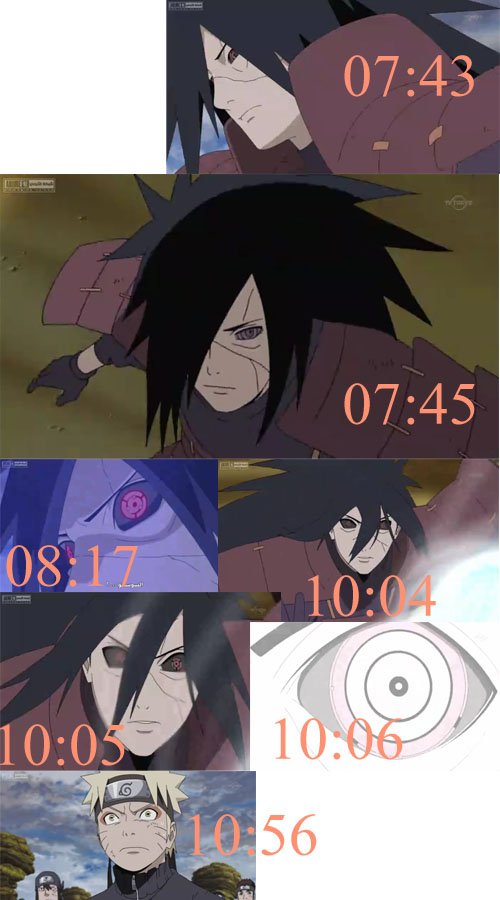 Since Madara came, he was using only Sharingan, and this can be seen until 07:43 in the picture, while he was dodging Gaara's sand attacks. However, when Naruto was above him with an Odama Rasengan, Madara suddenly could be seen with the Rinnegan on his eyes (07:45), and nobody noticed it like if it was a mistake. It should have been normal Sharingan.

Then, at 08:17, Madara was using the Mangekyou Sharingan, since he activated it after Naruto's attack to invoke the Susanoo.

And after that, at around 10:04, Madara was targeted by a Rasenshuriken, hence he had to activate the Rinnegan, and that was at 10:06. It was the first time that he did it since he came to life with Edo Tensei, and that could be confirmed from everybody's reaction when they saw his Rinnegan at around 10:56 ("Why does he have the Rinnegan?").

Was it a mistake that they drew Madara with the Rinnegan at 07:45?

Yes, it was a mistake (and yes, I noticed it before you did, ask the regulars at chat =P), nice job spotting it!

In the manga, that specific scene doesn't exist (the part where he looks up at the Rasengan), so apparently the animators or the editors simply made him with the Rinnegan for some reason.

14
How does the Mangekyo Sharingan blind its wielder, and why are some wielders not blinded?
16
How did the Sage of the Six Paths obtain his Rinnegan?
7
How was Nagato able to re-awaken and control the Rinnegan?
12
How can Madara use Susanoo without any eyes?
2
Why does Nagato have Rinnegan when he was awakened using the reanimation jutsu?
8
Is Gaara able to control sand because of his mother or shukaku (the 1 tails)
4
Was the Blood from Gara's Sand Coffin always black?
1
How did Shisui activate his Susanoo with only one eye?
3
Does using Izanagi require the Mangekyo Sharingan?