What is the hole in Obito's chest?

In Chapter 629, when Obito and Kakashi fought in Kamui's dimension, Obito revealed a hole in his chest and told Kakashi that the hole was opened by the hell of this world. It didn't seem to be a literal hole in his chest (like the Hollows in Bleach), because it wasn't present in the later part of the battle. 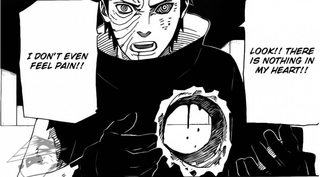 Was this hole used figuratively to indicate that Obito's heart was void of emotions, or did he teleport that part of his chest just before Kakashi stabbed him with Raikiri?

There was never any real hole in Obito's chest. It was a genjutsu, as shown in Chapter 636.

The genjutsu was activated right from the moment Obito pierced himself into Kakashi's Raikiri. Kakashi realises the genjutsu after a while, asks Obito to drop the act and fight for real.

It was actually a genjutsu but after the "real fight", he got a real wound on his chest(a deliberate attempt by Obito to undo Madara's Seal and become the Ten Tails Jinchuuriki)

11
When did Kakashi and Obito awaken their Mangekyou Sharingan?
2
How did Obito slip through the rubble?
8
Do we know anything about Obito's parents?
1
Does Obito's Mangekyou Sharingan make him invincible?
2
Could Hidan possibly get out of his hole?
7
Significance of the different designs of Tobi's/Obito's masks
4
Did Obito let Kakashi win?
3
Confused about Obito's ability
2
Obito's Clothes Affected by Kamui?
0
Can Obito's ocular jutsu acces multiple dimensions?