What does "crossing one's palm with fingers and gulping" signify?

I have seen in some anime where the character become nervous, sweats profusely and makes this action. For ex - Tadokoro Megumin from Food Wars: 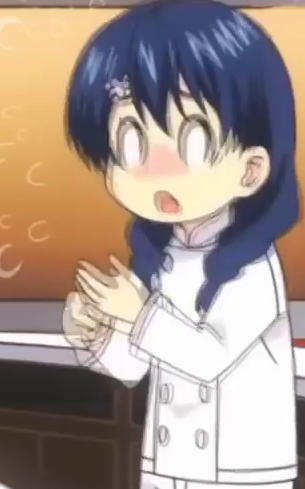 I have also seen Minoru Mineta from BNHA doing that. What does this action signify? Is there any cultural significance to it?

This action that Megumi is doing signifies anxiety and stress. It is a nervous habit, as explained in the show and manga. From the wiki:

She has a habit of tracing the kanji for "person" (人) on her hand then motioning, as if to eat it, whenever she is stressed.

I'm not familiar with the culture of Japan on this matter, but according to this article on the University of Southern California's site, it is part of the culture. Here's a quote:

In Japan, students nervous for a presentation are often told to draw the Chinese character for “person,” 「人」three times on their hand. They are then supposed to pretend to eat those “people” by putting their hand in front of their mouth, in the belief that this will ease their anxiety.

Furthermore, according to the same article, the rationale is:

The idea was that those three 「人」characters represented the audience in the palm of her hand, and eating them made them seem irrelevant, undeserving of her anxiety

I'm not familiar with Minoru Mineta doing this, but if it's really the same action, then everything still applies. And I'm fairly certain I've seen similar things done in other manga and anime, but I'm drawing a blank right now. I'll update if I remember any.

72
Does the "bloody nose" trope necessarily imply a sexual situation?
25
What is the origin of this facial expression with one's tongue sticking out?
7
Why are there so many "in Wonderland" episodes?
8
Where does the idea of a Hadouken and Kamehameha come from?
10
What is intended by a spiral on a character's finger and what is the origin of this trope?
13
Where did the Skinship Grope trope come from?
3
What does this grinning gesture signify?
4
Why are some characters shown to only eat one kind of food?
5
Why do protagonist usually mispronounce or forget the name of opponent or others?
4
Story-telling technique where the drawing style briefly gets much simpler?