What is the origin of this weird looking facial feature/mask?

I have seen this in one or two animes (plural of anime?) where characters have long cylindrical protruding mouths. It is quite rare(?) as I had seen this in only a handful of anime shows (I don't know the names). The recent ones that I know are Haganezuka and Kozo Kanamori from Demon Slayer (the blacksmiths/sword makers who made swords for Tanjiro and Inosuke). 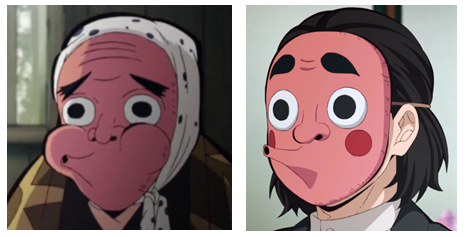 The other one that I remember is a fishmonger in Ninja Hattori (a show (is it an anime?) I used to watch in my childhood days) and it is always the fishmongers and shopkeepers. I don't remember any main characters or any characters noteworthy. First of all, that feature is not possible biologically/in real life. So, why is it adopted in anime and cartoon shows? What is it called (if it is a trope)? What is the origin of this feature?

I found this picture after a little bit more searching: 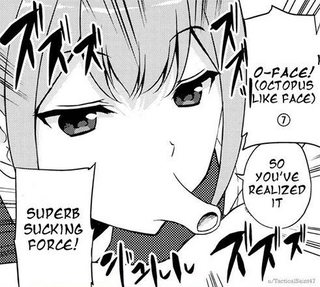 It said "O-face (octopus-like face)". Searching for "octopus-like face" yielded me no results. I do know about O-face which is ahegao (NSFW). But I don't think this applies here.

It is not the pout face or the side-faced lips expression (I don't know the exact name either(?)). Below is Suneo from Doraemon. 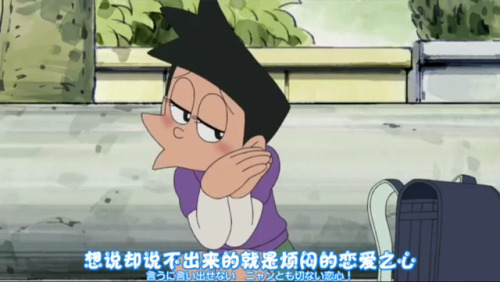 The face on the first picture comes from Hyottoko, which according to wikipedia is:

a comical Japanese character, portrayed through the use of a mask. His mouth is puckered and skewed to one side. Some masks have different eye sizes between the left and right eyes. He is often wearing a scarf around his head (usually white with blue dots).

The reason for it to be commonly used extends beyond anime and manga, though, as it is a common stock character in other media — such as theater — too:

Hyottoko seems to have been a legendary character in Japan in the past, and is now a stock character.

The reason why its features are the way they are, albeit exaggerated, is explained by its name too:

The origin of the name comes from "fire" (火, hi) and "man" (男, otoko), because the character is blowing fire with a bamboo pipe, hence the shape of the mouth.

I don't think Suneo's expression is supposed to be an adaptation of the mask or what it tries to convey, though I don't have anything to back that up with.