How was Vegeta able to be revived by the Dragon Balls?

(I couldn't find a question like this, if it's been asked before then please remove it.)

There are several known plot holes in the DBZ story, but one that interested me is that in the Buu saga (in DBK it's in ep127) it's said that when a human/alien that killed too many innocent people is dead, in hell they erase his body and his memories and recreate him. Piccolo said that in response to Vegeta's question of whether he could be meet Goku again, but it very clearly that he still won't be revived by the DragonBalls because of that. 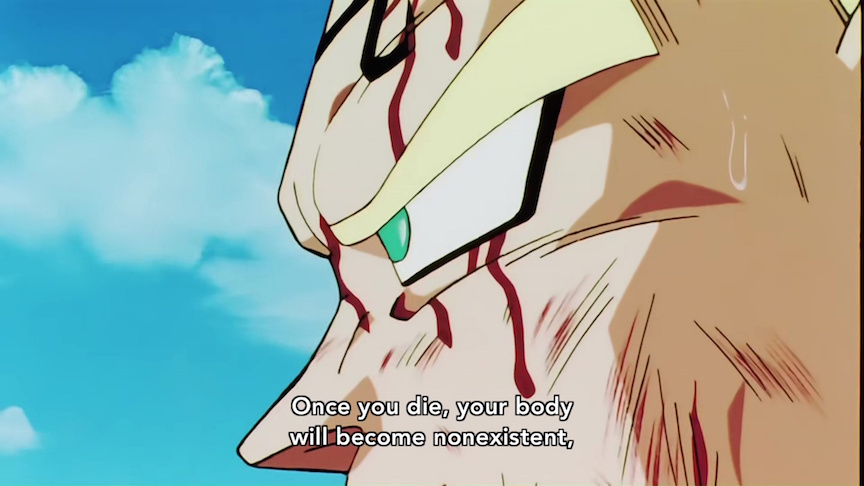 The content of Vegeta and Piccolo conversation in DBK ep127 (translated from japanese):

Vegeta: Tell me just one thing first, in the Next World or whatever it is, after I die, will I be able to see Kakarrot again?

Piccolo: At a time like this, it won't do any good to offer consolation, so I won't mince words. That won't be possible.

Now, in the original DBZ they created a plot hole by including a scene of Frieza, Cell and other villains watching the battle against Buu on earth when they were in Hell, but I'm not talking about that.

During the Frieza arc, Vegeta was clearly evil. Though he joined forces with Gohan, Krillin et al, he still killed a whole village, he's clearly evil, and yet, when Kaio asked Shenron to revive all the people killed by Frieza, Vegeta came back to life (in DBK it's ep51). If we go by the assumption that evil people are recreated in hell, then how was he revived? 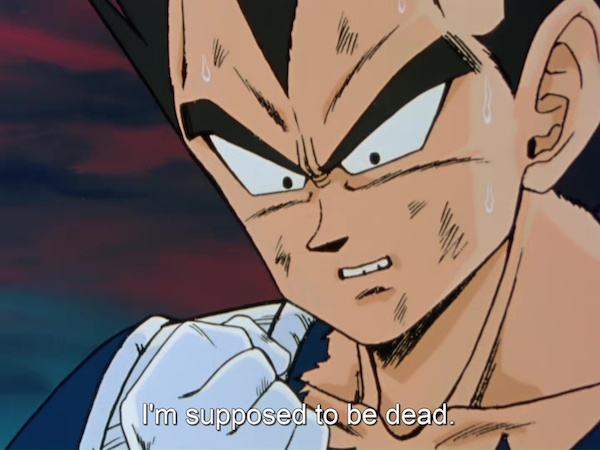 Though for a fact that Vegeta asked at the end of Buu saga from Prolunga to bring back all those who died except for any evil people to unrule bringing back Babidi and Dabra, that's not contradict the above, since Piccolo specified specifically that Vegeta killed to many people so he won't have a body, unlike Babidi that was evil but didn't were just evil and didn't killed anyone (not by himself at least) and Dabra who Daio sent to heaven. it's clearly that there's definite different between killing a lot of people to be just evil - killing a lot of people contaminating the soul so it needs to be recreate (like Uub) while being only evil not.

Now, I know it's a fact that Toriyama didn't want to make the Buu Saga, and there could be plot holes and all, but is there still some explanation for that?

Note 1: This question came to me after watching Dragon Ball Kai. If in the original DBZ it's not a question, I would love to be enlightened.

I'm not sure if I understand your question, but are you asking why he was revived because he was supposed to be erased? They explicitly mention in the series that Enma Daio Sama decided not to erase Vegeta's soul just in case he needed him for a battle. So what Vegeta said in the screencapture you posted didnt apply to him due to an Enma Daio Sama decision

(Sorry, I couldnt find an english version for this video, only a spanish one, but you can use the english subtitles feature of Youtube to add them)

I don't recall this being A Thing in DBZ, nor do I recall the Home For Infinite Losers (or "Hell") being elaborated on during the Namek arc.

In short: Vegeta was revived because the wish to Shenron was for all of the people who were slain by Frieza to be brought back. Because Vegeta was indeed killed by Frieza, he was resurrected by this wish.

Can't say much about the Buu arc here; in between these series, there may have been more than a few plot holes laid since this restriction never came up during Frieza's time.

Since your Note 1 says you're also interested in what happens in the original DBZ series, and if it's a problem there or not, the following is based on the English (Funimation) dub of the original scene. It seems that in the Japanese Kai version, Piccolo has a great deal more specific things to say, which are more problematic, as you indicate. I won't go into trying to work out the why of this apparent change, I'll largely just proceed to operate on the basis of the original Funimation dub, as indicated.

In the Buu saga scene, Vegeta asks Piccolo if he'll get to meet Goku in the afterlife (or in Other World, if you prefer). Piccolo then informs him that Goku earned a body and freedom of movement in the afterlife due to a long life of selflessness and heroics, and that Vegeta should not expect to be granted the same reward, having spent too much of his life being selfish and inflicting pain and misery. It is not stated that anything happens that erases memories or wholly prevents resurrection via Dragon Balls in this version. All he's being told is that he won't be able to run around being rivals with Goku in the afterlife.

What we do know is that elsewhere in the series it is implied that a spirit which is purified of its evil can then be reborn. This is how Uub comes to exist, as the reincarnation of the purified Buu. And in the movie Fusion Reborn, with the villain Janemba, there is even a machine for such purification. However, many villains and other beings are shown in Hell at various points and in various media.* This suggests that purification is not particularly fast or even mandatory, and may not necessarily be applied to the most powerful of entities. This is reinforced by how Fusion Reborn is predicated upon the (single) demon that operates the machine being lazy and not properly doing his job. So even if evil spirits are supposed to be purified quickly, in practice it would seem things are run too inefficiently to achieve this. There is also the fact that Shenron originally had a one year time limit on restoring someone to life. If whatever happens to evil beings upon death prevented resurrection via Shenron (which is who resurrects Vegeta on Namek), then there must be at least a one year delay between death and whatever this process is (purification and being reborn, or otherwise) in order for this time limit to be knowable and meaningful.

Moreover, we are ultimately told that Hell is planet-specific, and so the above purification stuff is for Earth only. So there's no reason at all to think that the rules stated for those who have died on Earth will also apply the same to those who die on Namek or anywhere else. So even if you are right and Vegeta should have been purified upon death, by Earth's rules for Hell, he wasn't by the simple fact that he died on Namek and not Earth.

And in any case, even by Earth's rules his resurrection is not prevented. We know, from Chiatzu receiving a body and Tien a new arm after losing them in their fights against Nappa, that it is possible for bodies to be repaired or reconstructed entirely in the afterlife. Upon being wished back to life, Chiatzu retained his body, and Tien retained his replacement arm. So even if Vegeta, upon his death on Earth, was denied the retention of his body (he wasn't, but by a special exception rather than having earned it), his body can still be reconstructed when something like a wish on the Dragonballs is made.**

Finally, in the Buu saga, we have two wishes that go out of their way to exclude the resurrection of evil people. First, when using Earth's dragon balls to restore those killed in Majin Vegeta's rampage, they specifically exclude the resurrection of evil people. Second, near the end of the Buu saga, when Dende wishes the Earth and then its people back using New Namek's dragon balls, he also specifically excludes evil people from being restored to life. And while we might say in the first case that maybe the Z-team doesn't know the exact ins-and-outs of what the dragon balls can do with regards to reviving evil people, Dende was an expert. Such specific exclusion of evil beings would be completely unnecessary if they were already impossible to resurrect.

*You don't seem to be quite as concerned with why so many decidedly-not-worthy beings have bodies, so I won't put much effort into trying to explain that. Best guess is that anyone of sufficient (will)power can forcibly retain/manifest a body, but they are generally denied freedom of movement and constrained to Hell (or HFIL in the original dub). Though why Piccolo would apparently not know this, and would not predict that Vegeta could probably forcibly retain a body, is less clear. Perhaps he wasn't being as honest as he claimed. But being constrained to Hell alone would be sufficient to keep Goku separated from him in normal circumstances.

**There's apparently a time limit on that, though, which ties into an exception into the 1 year limit for Shenron. In DragonBall Super, Freiza is wished back to life with Earth's dragonballs. When the wish is requested, Shenron says that since it has been more than a year since Freiza's death that he could only be restored to his body in the state it was in upon his death. Which in this case consisted of being sliced into dozens of pieces, thanks to Trunks. So if we accept this bit of Super, the 1-year time limit is more specifically about constructing a body for the being to be resurrected, and not necessarily about the soul becoming irretrievable for whatever reason.

10
Why didn't Frieza know about Goku and Kid Buu's fight?
17
Why did Cell and Frieza keep their bodies after they died?

17
Why did Cell and Frieza keep their bodies after they died?
2
How did the Earth Dragon Balls revive everyone killed by Frieza?
18
How many times was the moon destroyed?
10
Why didn't Frieza know about Goku and Kid Buu's fight?
3
When was the first time Goku turned into SSJ2?
5
Is the intersection of people killed by Cell and Majin Buu still dead?
3
Why was Grandpa Gohan never revived with the Dragon Balls?
1
Why don't characters teach each other techniques?