What is the purpose of purple rope belt that Sasuke wears?

All Orochimaru's people are wearing a purple color rope belt. What is the purpose of it? Why Sasuke is wearing it even after killing Orochimaru? Does it offer any power? 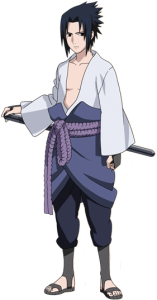 The purple rope is like an Obi, a garment worn with the traditional Japanese kimono. Besides that, and holding his clothes together, the only real purpose it serves is to hold his sword. You don't want to be always carrying a sword in one hand, especially during fights. Sasuke started carrying a sword after the timeskip, so that might explain why he changed his attire to include that purple rope.

Orochimaru used to carry the Kusanagi sword, and the other characters might be doing it to show their loyalty to Orochimaru.

No, it doesn't really offer him great power.
He just uses it as a holder for his sword. Normally all the swordsmen have a rope around their waist to keep their swords.

According to the Wiki -

He was first shown wearing a white long-sleeved shirt, similar in appearance to the lavender long-sleeved shirt worn by Kimimaro and which was open at the torso, with a smaller version of the Uchiha crest on his collar. He wore dark blue pants with a blue cloth hanging from halfway up his stomach to his knees. He also wore black arm guards that covered his forearms and stretched up to reach his upper biceps. He also wore a purple rope belt around his waist, tied in a bow, in which he carries his sword.

The purple "rope" is called an obi (type of sash/belt for kimonos). I think they just wear it just to represent that they are all in clan, or as a symbol to represent Orochimaru. Just like how all the Akatsuki wear black coats, but it really doesn't offer any power and one thing is that orochimaru's followers are usually swordsmen.

While the belt maybe refered to as an "obi," (sash) the style of the belt holds a greater significance in Shinto culture. The particular style of obi is probably what's referred to as a obijime, which basically is a decorated rope sash in order to tie an obi firmly. The braided rope is what you would call a shimenawa.

Much like how trees are considered sacred have a shimenawa tied around their trunk. The Yokozuna (grand champions in sumo) wear a shimenawa around their waist, designating them to be of special quality (if they have a gohei attached, there is a sacred bearing to it).

Perhaps the idea of the author wanted to give for Sasuke with his clothes was that he's special and or someone to be revered. The rope sash is probably there to keep that skirt/kilt/cloak thing he has over his pants in place.

I know that Red is a color that can repel bad stuff(like magic and evil forces) ''Vermilion red is considered an amulet against evil forces, and is used in many ancient palaces, shrines and temples.'' (source: http://inari.jp/en/faq/ )

So I thought I just googled if the color Purple had any meaning behind it. And when I googled it this is what I found: Purple, the color of the upper class, ruling people Apparently the color purple was kinda rare during the Nara era(710-784)and only the important people like high-level officials and the Imperial family could wear purple clothing and back then they made it so that purple clothing was really expensive and only rich people were able to afford it. (source: http://tadaimajp.com/2015/05/purple/ )

Sorry that I replied on a very old thread, but I was curious about this topic and when I found the answer I thought I should share it with you guys ;P

Firstly, the size of the belt means that the author wants the viewers to notice it.don't quote me on this but I think that in Japanese martial arts, it is said to control or rather 'subdue' the strength of its user If you ever played street fighter,you will notice that akuma who wields great strength wears the same belt(much thinner).

Okay. the other answers offer good info except ONE thing: the Buddhist tale of the snake and the rope. It is an analogy about the fear you have before learning you have no set or stone "self" that the "self" is everchanging. Letting go of the concept of "self" is to become enlightened. Almost all people in Japan are Shinto Buddhists (predominantly Zen ). So they would have been raised knowing the famous story. When you think of this story applied to the characters Uchiha Sasuke and his shisho Orichimaru it becomes a brilliant addition as an obi. Orichimaru wanted to find immortality and remain in his current incarnation then of course Orochimaru abd snakes are intertwined both visually and litteraly. I am glad that the anime did show that snakes are not seen as evil and in fact they are a good sign outside christianity. Sasuke wore it when he was much to full of himself and was stuck seeing himself only one way as one part of who he actually is which led him to darkness: an advenger. Plus they are both aloof and can be thought selfish though that is not necessarily the truth. For them and for the others wearing a rope obi one more noticeable symbolism connection to the snake and the rope story is that they are always caught in the fear the instant you glance at a rope in the woods by your feet and think it a snake. When you realize it's just a rope that is the same as the feeling of being free of self- laughing at the fact we were so scared for that second: enlightened. All except Sasuke wore it so it stuck up behind them which would cause these glimpses of it. And it was AWAYS with them which is why I think it doesn't just symbolize a snake (because of Orichimaru). The story itself was written not by any Buddha but The Buddha, Shakyamuni Buddha (originally Sidartha Guatama) and is found in one of Buddhism's sacred scrolls or Sutras. I'm a symbolist painter as well as a Buddhist and I instantly made this connection when watching the Naruto series's and movies. It got me thinking that Western watchers of Anime (me included) should read more of the common knowledge stories and mythology that far eastern kids grow up with because Anime is rife with symbolism and motifs derived from them. In fact, Japanese culture is incredibly full of visual symbolism. The western world has nothing I know like it. One other (among many) examples of the symbolism in anime is The Third Hokage's summoning animal which is a monkey with an amazing growing staff. This is based directly on one of the most well known myths in the Far East: Journey to the west. The anime Saiyuki is based entirely on it and I believe that "saiyuki" is the actual or similar title of the HUGE myth. On a side note check out the book "Monkey" which takes excerpts from Journey to the west and combines them into a wonderful and easily accessible book that gives you a good understanding of what the whole thing is all about and tells some of the stories the author and/or editor and/or translator (name to be added) thought most poignant. I'm actually very tired right now and will come back and edit this so that it has more info and the name of the author. The book itself is about the same thing as the full version: the story of a journey to bring Sacred Scrolls (Sutras) like the one with The Snake and The Rope in it back from India (to China where the myth originated). Monkey is not long and has a red cover with spirals on it I believe which, along with the sutra reference, brings me full circle back to Naruto (you know what that name means... At least I hope you do!)

12
What does the 'belt' Orochimaru and the Sound Four wear signify?