What is the name of the garment worn by robbers in anime?

I have seen robbers wearing scarves that is tied to the nose and is carrying a huge bag on his back. This style is very common and is used to represent robbers as if it is a trope. If so, what is the name of the garment? Is it used for stealth purposes? I do not currently remember any scene but it sorts of looks like this: 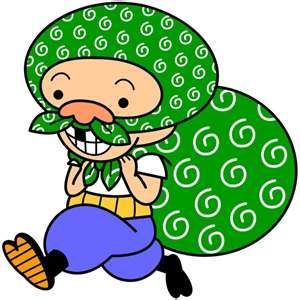 That would be a tenugui (手拭い), a thin, often cotton towel used for wiping away sweat on hot days. Or drying hands after washing them. They are also used as a form of headgear or scarf on cold and hot days respectively. However as a headgear it's more often worn as a headband, as opposed to the image above.

In anime, this way of wearing a tenugui would fall under the trope of Stealth Clothing. Which points out that it originates from old Japanese romantic practices.

it is derived from ancient Japanese romantic practices. Young unmarried women were not to be too friendly with young men, and home visits at night were right out! So the young man would wear a handkerchief in the aforementioned manner

So yes, it traditionally has been used as a form of paper-thin disguise