Why didn't Danzo get the Rinnegan?

In Naruto, it was said that you need both Senju and Uchiha DNA to achieve Rinnegan, right? So why didn't Danzo get Rinnegan? He had Senju DNA holding Uchiha DNA.

Well, that's becasue you also need to be competent enough to master both these powers.

Madara was strong enough, and was able to awaken it. Danzo however, was not.

Danzo's DNA originates from experiments and body modifications. He wasn't a "Natural", while Madara had natural mastery over the Uchiha powers, and after being defeated by Hashirama, mastery over the Senju powers.

It was also implied that you need to be very close to the end of your lifespan to awaken the Rinnegan.

Danzo didn't awaken a Rinnegan because he is not a reincarnation of Indra. Even if he did, he only has the chakra reserves for like one or two moves. The manga and anime state that in order to awaken the Rinnegan without means of transplantation, one must possess a Sharingan, be Indra's reincarnate, take chakra from Ashura's reincarnate (these are Hagoromo, the Sage of Six Paths two sons) thus reforming Hagoromo's chakra, leading to the Rinnegan awakening. If a non-Indra reincarnate does what Danzo did, all he would get is Izanagi-spam, lesser cooldown on Kotoamatsukami wait, and Mokuton (wood style.)

Put simply, Danzo didn't awaken a Rinnegan because he isn't an Indra reincarnate.

Just in case you still don't understand, here's an image from the manga when Hagoromo himself explains how Madara awakened the Rinnegan. 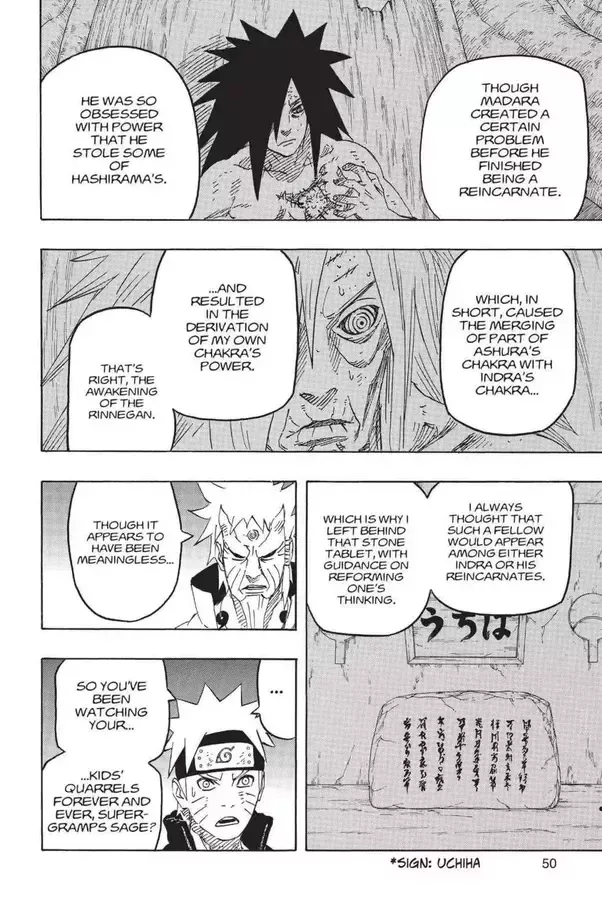 Danzo was not able to awaken the rinnegan because he had senju DNA and Uchiha eyes but had neither enough chakra to effectively utilize either ability (hashirama' s wood style or the sharingan in his arms). While madara was an Uchiha who implanted hashirama's DNA throughout his whole body he did not awaken the rinnegan until he was near death. It would not be expected for someone like Danzo to be capable of manifesting the rinnegan, at least at the point in time that he was living.

Like many said, you kinda need the "blood" or "chakra" of the Uchiha and Senju to awakened, which many stated to be implied at the end of one's life. Danzo doesn't have any, only body modifications. Danzo had the Sharingan because he STOLE them, he ripped them out of the Uchiha who had them, therefore he will never awaken the Rinnegan. That's why he was bandaged, so it doesn't drain his chakra. It's not that Madara was strong enough, he basically had the requirements to do so, just at the end of his life did it awakened.

Nagato was implanted the Rinnegan at a early age by Madara before he died, and Nagato is of the Uzumaki, hence how he could easily handle the Rinnegan (I am sure if he had both Rinnegan or just the one).

2
Did Danzo know that the Rinnegan existed?
7
How was Nagato able to re-awaken and control the Rinnegan?
3
Where did Danzo get his first Sharingan?
2
Is it possible to get the Rinnegan by injecting Senju and Uchiha DNA into yourself?
5
Does the Uchiha:Senju DNA ratio matter in awakening the Rinnegan?
3
Why does Madara give Nagato his Rinnegan?
10
Why didn't Itachi tell Hiruzen (the 3rd Hokage) that Danzo attacked Shisui?
6
Would Naruto awaken the Rinnegan if he takes the Sharingan from Sasuke?
6
If Tobi could use the izanagi, which requires both Senju and Uchiha DNA, then why wasn’t he able to awaken the Rinnegan on his own?
1
Why didn't Danzo want to recall Naruto to fight Pain, which would've stopped Pain's destruction of the village?