How is 'Mobu' wasei-eigo?

Wikipedia is the only place which posits that the main character of Mob Psycho 100, Shigeo Kageyama, has a nickname 'Mob' which is wasei-eigo for 'background character'.

Mobu is not listed in any list of wasei-eigo words.

Can someone break down how Mobu is wasei-eigo?

As mentioned in the comments by F1Krazy already, this information is likely wrong.

The nickname actually originates from his First-name, Shigeo. The Kanji for which can alternatively be read as "Mob" (モブ, Mobu).

This is also confirmed to be the source of his nickname in the Character guidebook as mentioned on the Mob Psycho fandom, a copy of which is included at the bottom of the post.

All though Mobu might not be wasei-eigo for "background character", it does infer such a character. Some more background on this can be found on Japanese.SE's question: Etymology of モブ 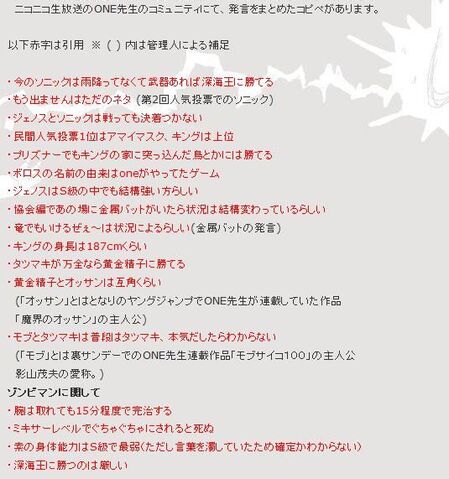 Not the answer you're looking for? Browse other questions tagged mob-psycho-100 .

4
How many times has Mob reached 100%, and what emotion surfaced each time?
2
How did they do for being able to retain Toichiro Suzuki for incarceration?