Are all humans in Naruto universe mandated to admit in the shinobi academy?

All humans in Narutoverse have chakra and that anyone can be a shinobi if anyone is able to use and manipulate chakra to a greater effect.

I always thought that everyone born are admitted in the academy and there, they learn how to use their chakra and rise through the ranks and become a ninja similar to schools and education in real life. The Academy students were trained and prepared for life as a shinobi. Is this true? Is it mandatory for all humans in Narutoverse to admit in the academy and be a ninja?

We see quite some non-shinobi professions, for e.g.Teuchi becoming a Ramen chef. Just like my above assumption, did he once admitted in the academy in the childhood but choose to become a ramen chef?

Is it mandatory to for all to take admission in the academy and learn the basic elementary jutsus and experience the initial life of a ninja before becoming something else?

Is it mandatory to for all to take admission in the academy and learn the basic elementary jutsus and experience the initial life of a ninja before becoming something else?

Most probably yes. Everyone must know the basic jutsus. Then, it's upto them to clear the exams to be a full-time shinobi or quit the academy to be something else.

We see quite some non-shinobi professions, for e.g. Teuchi becoming a Ramen chef. [...] did he once admitted in the academy in the childhood but choose to become a ramen chef?

YES. He would have known basic jutsus but didn't progressed that far in the Shinobi world. Maybe he was a pre-genin academy student or had acquired genin stature before quitting. Since he is a chef, he might be skilled in Kenjutsu and talented with Kunai and shuriken. He would probably possess an Earth and Water Release affinity, possibly Fire Release but the Chakra Reserves was probably averaged sized and ultimately run out of chakra fairly easily. He doesn't know a whole arsenal of jutsu but knows quite a few of them.

Now, an image circulated quite a bit which spread the fact that Teuchi might have been taught by Jiraiya but it was never confirmed. 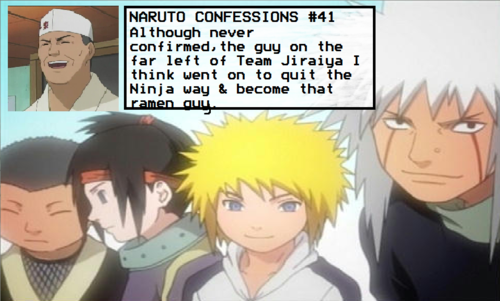 Teuchi could've been the team member of Jiraiya team-7 since they would be around the same age group and it would explain why Teuchi wasn't afraid to scold Shinobi for nonpayment, because he was a retired Shinobi himself. It would also explain why he never shared the same resentment as the rest of the village towards Naruto as a kid and genuinely accepted him, giving him free food sometimes and treating Naruto as a valued customer. He does this because he was teammates with Naruto's father and knows that Naruto is Minato’s son. He can see the resemblance in Naruto and knows something great will come of him. This would also explain the respect that he has towards Jiraiya.

It's voluntary some families seemed to push their kids into being Shinobi having had certain powers passed down through their bloodline which lead them to being conduits for Government officials and the mass majority seem to want to join the academy because it's a prerequisite to becoming Shinobi which are highly respected and centre of all awe.

12
Can anyone be a Ninja/Shinobi?

3
What was the significance of all the shinobi wars?
6
Are there any slugs besides Katsuyu in the Naruto universe?
9
How many nations are there in the Naruto universe?
11
Did Itachi Uchiha want to be Hokage when he was young?
6
At the end, did Naruto skip Chunnin and Jounin rank before becoming Hokage?
3
Can anyone in Naruto universe use all five chakra natures?
10
World Map of Naruto Universe
3
Could reanimated Nagato revive anyone he wanted?
0
Do humans in Naruto who are descendants of Otsutsuki have any extra abilities over pure humans?