What happens to King Torture's soldiers once defeated?

King Torture's monsters always have some soldiers alongside them.

When the monsters are defeated, they scream "Viva Torture!" and explode. The soldiers, however, have been seen lying defeated on the floor even after a monster's explosion: 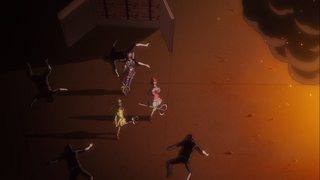 Do they also explode and vanish after being defeated?
Or have they been being taken into custody for questioning or something of the sort?
Or are they somehow able to get away?

I think to understand this its important to recognize that the show is all about celebrating Tokusatsu tropes (think Power Rangers). This is why, as in most Tokusatsu shows, all the bosses explode. Now, in most Tokusatsu shows, the minions are just beaten up and then ignored. Frequently they just seem to disappear between shots. There is no particular "canon" explanation of what happens to them for the genre as a whole. Since Samurai Flamenco is emulating these shows, it also ignores the question of what happens to the minions.

So the answer is that they probably do the same thing that minions do in every other show, but nobody knows what that is.

Not the answer you're looking for? Browse other questions tagged samurai-flamenco or ask your own question.

2
What does the B in King Torture's soldiers' forehead stand for?