Does White Zetsu even have any negative emotions?

During the Fourth Great Ninja War, the army of White Zetsus were a major problem because they could perfectly replicate people they'd touched, such that the Byakugan and other sensory abilities could not distinguish them. The solution to this problem was Naruto using his Nine-Tails Chakra Mode, which allowed him to sense the hatred and anger of the Zetsu.

However, this doesn't make sense to me. White Zetsu behaves like a child a lot of the time. For instance, chatting easily about poop and having a rather carefree attitude, sometimes even whilst in the midst of battle (during the Kage summit, for instance). Does White Zetsu really harbor such negative emotions that it would allow Naruto to distinguish him from his own allies, who, being adults in the midst of a brutal war, would undoubtedly be harboring just as serious negative emotions? What I'm trying to get at, is I believe that the Shinobi Allied Forces hate White Zetsu, but I don't see any compelling reason to suspect White Zetsu hates them. Of course, It's entirely possible I've misunderstood something or overlooked something.

So, my question is this: is there something I'm missing here, either with regard to White Zetsu's emotional state or to Naruto's powers? Are there any specific instances where White Zetsu's negative emotions are apparent?

This question in a way has a mixed answer.

White Zetsu was created after Kaguya ate the chakra fruit from the god tree and used her new powers to stop a war by taking the people there and using the Infinite Tsukyomi technique to slowly transform them into White Zetsu.

Most of the White Zetsu that appeared in the war were ones that were created due to Kaguya casting Infinite Tsukuyomi upon the populace. This jutsu enslaves people in their dreams and slowly turns them into the jutsu casters pawns/soldiers (White Zetsu). Naruto would be able to use his sensory abilities to identify whether friend or foe because I don't think White Zetsu can mimic emotions, only looks, chakra structure, etc. There are many other ways to figure out whether friend or foe, as when Sakura tricked fake Neji by saying Tonton, a pig, can use hand signs.

However, not all of the White Zetsu in the war were people created from Infinite Tsukuyomi. Some of them were created by Madara, which were said to be incarnations of his will. Due to this, all the Madara-created Zetsu would feel some sort of hatred to those interfering with project Tsuki no Me (the entire Allied Shinobi Force), thus making Naruto able to sense them. Naruto is also able to track peoples chakra signature using the same ability.

Due to White Zetsu not being able to copy emotions, Naruto's ability would be able to identify them based off how he senses their emotions.

After doing a lot of thinking, I believe I can prove White Zetsu does have negative emotion. Naturally, it comes back to the poop. In the episodes of Obito's backstory, he meets several of these artificial beings. They display a disdain for "lesser beings" and seem to consider themselves superior, especially because they don't need to poop. If such an attitude is not addressed, or perhaps even encouraged and cultivated, it could naturally progress into a kind of racism, which would be considered a negative emotion, or at least something that causes negative emotions. Seeing the Allied Shinobi Forces then being able to so thoroughly defeat their fellow superior beings, as they did, could cause a whole lot of bloodlust, as it would be an attack on their worldview of their superiority.

I can't fully answer how Naruto is able to differentiate the hatred, but I think if we consider the types of battles disguised White Zetsu were in, the allied Shinobi may not be feeling bloodlust, but rather confusion, since they're fighting their comrades at that moment. Meanwhile, White Zetsu definitely wants to kill them. I'm not sure if this accounts for everything as I don't remember every instance where White Zetsu appeared, and honestly I think it's a bit of an error, but this is the best I can do here. 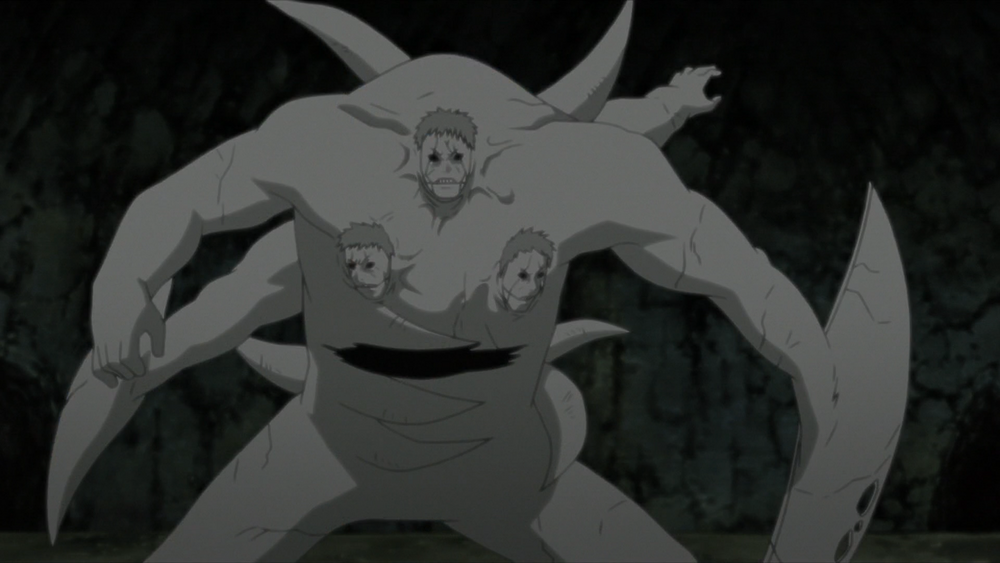 6
Does Zetsu have a word soul?
7
Does the mark on Kimimaro's forehead have any significance?
15
Why does Naruto have whisker marks?
5
Why Tsunade-sama did not have wood element even though she was direct descendant of Senju Hashirama-sama?
2
Does Shikamaru have a summoning animal?
6
How many transformations does Naruto have?
0
Did Karin even have any "romantic" relationship with Sasuke?
2
Does Minato still have Yin-Kurama?
2
Why did Neji’s father stil have the Hyuga curse mark on his forehead even after his death?
0
What Sharingan does Indra have?