What is this symbol called which is used to denote "II" in the second season of "The Quintessential Quintuplets"?

The Japanese title for "The Quintessential Quintuplets 2nd season" is 5-toubun no Hanayome ∬. I assume "∬" to be number 2 or "II". But this symbol looks more like the Integral symbol or "Double Integral" to be precise. This symbol is used in mathematics and is never stylized to show numbers or anything. So, is this symbol anywhere present in Japanese script? Or is it just a cursive way of writing "II" that ended up looking like integrals? 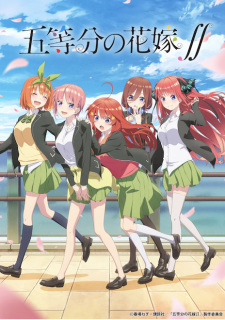 No, you're right, that is absolutely the double integral sign. There's a trend of indicating follow-on seasons of shows with indicators like random punctuation marks or letters (see, e.g. this question about Nisekoi: or this one about Dragon Ball Z), and this is almost normal by comparison since it does actually look a bit like a stylised II rather than, for example, adding an apostrophe or a random letter.

It's also vaguely relevant to the show itself - since Uesugi was brought on to tutor the five girls in subjects such as mathematics, which potentially includes a little bit of calculus.

Not the answer you're looking for? Browse other questions tagged japanese-language symbolism or ask your own question.

2
English letters in anime titles
2
What is meaning of colon in Nisekoi second season name?