What did Light write before killing Shibuimaru Takuo?

So I decided to rewatch Death Note. In the first episode, there's a motorcyclist called Shibuimaru Takuo - Light's second victim. In the scene where he is about to kill him, according to my subtitles, he writes:

And we see this: 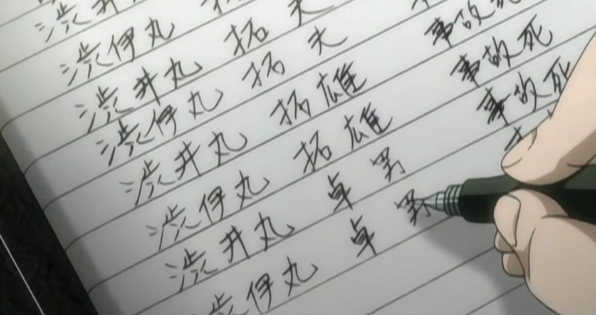 I don't know Japanese, but it seems to me that all the lines are the same, except for the two last ones.

Since that guy is just his second victim, what exactly happened in that scene? What do these lines say, and why did Light several of them, over and over?

From what I remember (although I don't know enough Japanese to confirm this), he was trying every possible different spelling for the name of the victim.
The Death Note wiki page on the first episode also states this as a fact (in the sixth paragraph in the synopsis.

Now, if you've already watched the series and are currently re-watching it, you're already familiarised with the rules. The one that is significant in this particular case is rule #2 (highlight by me):

This note will not take effect unless the writer has the person’s face in their mind when writing his/her name. Therefore, people sharing the same name will not be affected.

This means that Light was trying every possible spelling of the name, because at least one of them would match with the face pictured when he wrote the names. This also means that no collateral casualties would occur, as that particular person's face was being pictured in his mind.
If I'm correct on this, the first column are different spellings for Shibuimaru, the second for Takuo, and the third column refers to the death ("accidental death" (事故死) is what it says).

He did not have to try this out with his first victim because he got both his face and name from TV.

Long story short, he was trying to match a name for that face by going through every possible spelling.

Editing in some info from the below comments:
This does not appear to violate the rule on rendering the Death Note void if the user misspells a person's name more than 4 times, if one of the first four spellings was correct (which seems to be the case).

JNat's answer is correct. Just to add a bit of info:

The variants of "Shibuimaru" that he tries are:

Note the differences in the middle character.

The variants of "Takuo" that he tries are:

I think we encounter another minor plot hole here (at least as shown in the anime) - Light stops writing after iterating over all 8 combinations of those names (the first of which, 渋井丸 拓男, turns out to be correct), when there are actually at least 2 more spellings of "Takuo" (卓夫 and 卓雄) that should've been possible.

He wrote down the man's name 8 times, the first of which was correct. The next 7 attempts were other guesses at the spelling of Takuo.

There is, however, a rule in the death note stating that if a person intentionally writes a name incorrectly four times, that person will die.

However, just like in "Death Note Onison", the intent to misspell is a key factor. In "Onison," L has Misa write his and his companions name's down four times. They do not die, however, because L knew Misa was illiterate, (at least in this version of Death Note) and she tried her best to spell the names correctly. Because she tried with intent to spell correctly, she did not die; Light Yagami did not die for the exact same reason.

Light Yagami has found the perfect murder weapon, and unknowing almost killed himself in the process of trying it out. Had Takuo's name been written incorrectly over 4 times first by Light, and then one of the next four spelling been correct, Light may have been killed first, then Takuo. Light would die since he got the spelling wrong 4 times in a row before getting it right. Takuo would die because Light still got it right once, and a name written in a Death Note can never be prevented.

Even though I have already stated that intent is required for the Death Note to be effective, evidence is only seen for this in "Onison," which was only a skit, and the word "intent" in the rule on the Death Note page describing that the person would die if it was written incorrectly four times.

Even though Light did truely intend to spell it correctly, he did know he would potentially misspell it as well. As we see in the Manga and the Series, the rules of the Death Note can be somewhat loose. If you figure out a particular rule by testing it, you can utilize it how Light did. However, we never see somebody incorrecly spell a name 4 times in a row to see what would happen to them, since Light got his very first guess right.

The truth is, nobody knows what would have happened had Light been wrong more than 4 times before getting it right, since we never see what the Death Note would do in a situation like that. How the Shinigami killings occur is a very interesting speculation, but impossible to comprehend.

Luckily Light did not intend to misspell the names, and he also spelled the very first one correct. This means that one of these factors prevented Light from dying, and continuing to utilize the power of the Death Note. Unlocking this secret could have cost Light his life, (if that sounds melodramatic, an early death) but his spelling abilities allowed him to almost rule the entire world.

Shinigami: "It's a Death Note. You just write a person you know's name in it."

Note: The previous skit at the end is based on the assumption that the result of writing a name 4 times consecutively with the intent of being correct will not prevent the death of the Death Note user. However, this is not proven in the series and is merely speciation at this point.

Credit: The line, "If that sounds melodramatic, an early death" is taken from the light novel "L Change The World," which features an alternative ending that L defeats Light.

5
How would you write Light Yagami's name in the Death Note?

8
Did Sakamoto really write in cursive?
8
Did Light truly love anyone?
1
Why did Light want to kill Near?
5
How would you write Light Yagami's name in the Death Note?
16
Did Light Actually Like L (in a friendship way)?
4
Did L win against Light?
1
How did Light went unnoticed by his dad?
0
Couldn't Light have relinquished ownership of the Death Note before dying?
7
Did Light knew L's real name?
1
What exactly does Sukuna say when Itadori breaks into Mahito's Domain Expansion?