Hataraku Saibou - does the cell have cells in their bodys'?

by cells i mean little people running around the hosts body.

like infinate cells who are running around etc??? #RabbitHole

No, the cells do not have little people running around inside of them. You seem to be accusing the show of making a homunculus argument, a fallacy whereby a concept is explained recursively with itself, but this isn't the case. Importantly, these humanoid cells are not an explanation for what is going on inside the human body. Instead, the cells are an example of personification, whereby animals, ideas, or something else (in this case, cells) are given human characteristics. These humanoid characters are a representation of the thing itself. Of course, in the context of the story these human appearances are important and necessary, but there is no reason to assume the analogy goes so far as for the cells to have little people inside of them.

To illustrate the anatomy of cells, and how they don't have little people inside of them, here are pictures of an erythrocyte and a neutrophil, which is what the two main characters are: 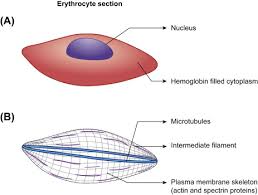 The two humanoid main characters represent the two types of cells above. A cell is the basic unit of life, and is not composed of itself (cells aren't made up of cells). Cells have organelles, cytoplasm, membranes, etc. We shouldn't confuse the personification in this story such that we believe the cell characters are exactly equivalent to human beings and thus end up with a recursive homunculus argument.

Full disclosure: I have only seen the first season of this show. However, you haven't provided any details that would make me think my answer is wrong. Such pertinent details might include, but wouldn't be limited to, a scene in the show where it shows little people inside of one of the characters.

NO. I assume your question is half in jest. But here is the Biology Lecture, please don't get bored.

Biologically, Cells are the smallest independent functional unit and hence make up the building blocks of the body. i.e. anything smaller than a cell cannot exist without the associated molecular machinery that only a cell can provide.

The internal structure of the cells are made up of organelles and other molecular machines which assist in the functioning of a cell. Performing tasks such as maintaining cell structure, maintenance of genetic information, generation of energy in form of ATP to say a few.

Now, there is what is called an endosymbiotic hypothesis which says that certain organelles within the cell like the mitochondria and chloroplast in planet cells were once ancient Prokaryotic bacteria, which were engulfed by larger cells. These in time gave rise to Eukaryotic cells which make up our body.

So, in a way, cells do have cells within them. Or more accurately the remains of cells.

Not the answer you're looking for? Browse other questions tagged hataraku-saibou or ask your own question.