Are there any filler episodes in Kaguya-sama:Love Is War?

Which episodes in the anime are filler (if there are any)?

I have 2 answers to this:

I said initially in March

The whole show is a slice of life kinda comedy. What do you mean? It's like asking what filler episodes are there in Lucky Star I think – BCLC

And then I said just before Easter

Now that I've seen both seasons I think in some ways this could be a good question. Some episodes esp in s1 seem to be standalone things that are merely 'filler' but then they are referenced in future episodes. – BCLC

The question I would instead ask is 'Are there really any filler episodes?' For example, you might consider the following fillers, but they're kinda referenced in later chapters/episodes

But each are relevant, at least a little, in later episodes (again, s1 spoilers)

The umbrella episode S01E05 (re Miyuki's bike riding to school) and the non-meeting at the student council room in S01E11 (The interpretation seems to be that for S01E03 Kaguya and Miyuki meet up serendipitously when they do good things like help out children, but for S01E11 they don't meet up serendipitously when they do bad things like hiding their feelings).

My view is that Kaguya-sama invites you to redefine your definition of 'filler' to something like: 'an episode/a sub-episode/a chapter that (isn't an end in and of itself and) isn't referenced in future episodes/chapters'. One might also add that Miyuki vs Kaguya battles are ends in and of themselves, so for example the umbrella sub-episode of S01E05 isn't filler because the point of the show is really to show these battles.

That said, even in this new definition, I believe the anime does have fillers still like the nails in S01E06.

Edit: Answer 3 - later in the manga

Wait I have another answer now. With the way the manga is going now (Chapter 250 onwards), it doesn't look like this series is some mere slice-of-life. Like it evolved from such or something.

Kaguya and Miyuki do it.

Anyhoo there might be some spoilers so I'll spoiler tag the afterword, but basically Aka says Volume 14 was kind of a turning point, so I guess there are less filler (in either definition?) chapters after this Volume.

Without further ado, here's the last part of the afterword. 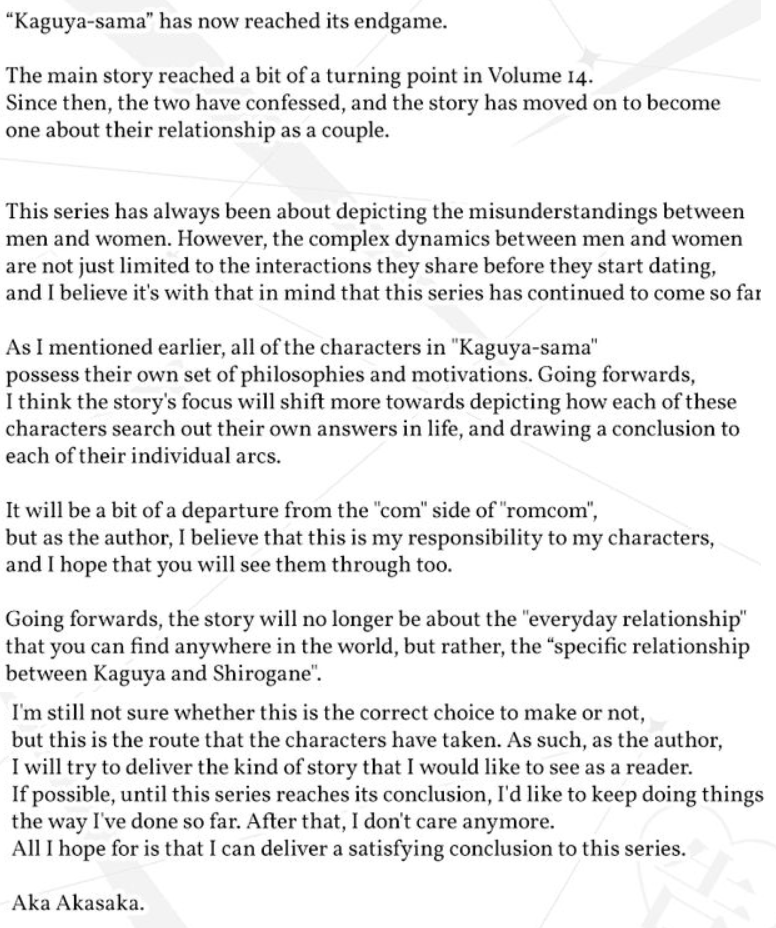 Actually, as an alternative to the anime/manga, you can watch the live action movies. (They weren't quite so well-received, but me personally I really liked them.)

There are 'filler' stories in the movies but are extremely limited, mostly in the beginning of the movies and necessary to set the background of the story. They turned certain episodes/chapters that might be considered 'filler' (even in the new definition) to be relevant to the main Miyuki x Kaguya story and turned even less relevant or less immediately relevant episodes/chapters to be more relevant eg Kaguya's health issues and lack of sex education.

5
Is this a COVID-19 reference in Kaguya-sama: Love Is War season 2?
7
Why is Kaguya depicted with a flower growing out of her head when in her moron/fool form?
1
Why does Chika care about Kaguya's date in the pilot/premiere?
2
What does 'konnichi sappo' mean in episode 8 of Kaguya-sama: Love Is War?
1
What is the height of Kei Shirogane?
1
Relationship between Kaguya and Yu Ishigami?
0
Has the previous student council president really appeared in the anime?