Was it formerly common practice to credit voice actors in opening credits?

The final OP for Monogatari Series Second Season (the Koimonogatari OP) is sort of an 80s-throwback sort of deal, with all the hallmarks of old anime styling - funky "lens flares", those old-school clouds, a song reminiscent of 80s-era pop, captioned lyrics - the works.

One particularly interesting feature of the OP is that it credits KAMIYA Hiroshi and SAITOU Chiwa as the voice actors of Koyomi and Hitagi, respectively. 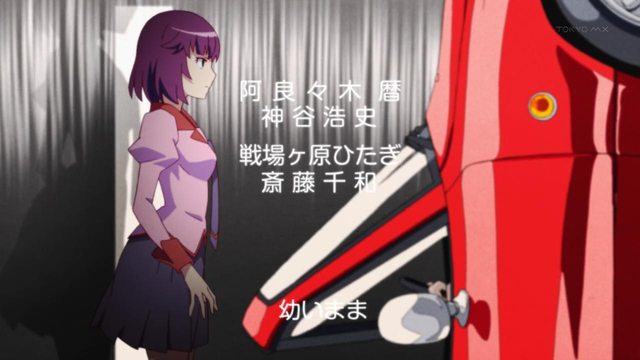 No TV anime from the past two or three years that I have watched has (to the best of my recollection) credited a voice actor in the opening credits. The opening credits typically seem to be reserved for producers, directors, original creators, and people like that. Voice actors are, of course, credited in the ending credits, usually towards the beginning.

And so, the question: Was it more common back in, say, the 80s or thereabouts for voice actors to be credited in anime opening credits (in place of or in addition to the ending credits)?

(Or, alternatively, is this aspect of the presentation of the Koimonogatari OP just idiosyncratic / anachronistic / otherwise not in keeping with common practice from a few decades ago?)

It's uncommon, but it's not that rare.

According to the Japanese Wikipedia:

It's often to have 2 credits scene for movies, TV programs, etc.: opening & ending. The general rule is, opening credits the studio, main performers, producer, supervisor, writer, etc., and ending credits all of the staffs.

In Japanese TV dramas, it's common to have the opening shown all the credit and omitted the ending in the 60's. However, in 70's and 80's, the credits started to split to opening with important credits, and ending with the rest. In 90's and later, it became common for the opening to only show the title, and the ending plays the theme song while listing all the credits.

However, most of 60's & 70's anime OPs didn't even list any credit, only showing animation & song, sometimes with lyric (unless I was apparently watching the non-telop version...). Even if they list the credit, it's similar to the current trend (production-related credits), but there were some which included the voice actors (out of around 25 anime OPs that I watched):

Note: 声の出演 is the same as CV (Character Voice).

The Term Character Voice(CV) has been commonly used since the 1980s by such Japanese anime magazines as Animec and Newtype, for a voice actor associated with a particular anime or game character.

So your theory that says:

"Was it more common back in, say, the 80s or thereabouts for voice actors to be credited in anime opening credits"

May be true. But I didn't found anything to confirm it.

But in the particular case of that opening I think that it was just some kind of joke, if I remember well on that opening the main characters that appeared were Hitagi and Kaiki, but not Koyomi. Also the opening itself just don't fit with the anime style.

I hope my answer was useful to you.

Not the answer you're looking for? Browse other questions tagged anime-history theme-song monogatari-series or ask your own question.

1
What opening music was played at the beginning of the anime Kaiketsu Zorro?
4
Is it a common practice to change the title into something different?
13
What was the first anime that uses different ending/opening songs in every episode?
7
Was this really the original American/English-language opening/intro to Sailor Moon? If so, why was it so heavily changed?
4
What is this dark alleyway scene from the second opening credits of Jujutsu Kaisen?
0
What does the black-and-white fish symbolize in the opening credits for 'Jujutsu Kaisen'?